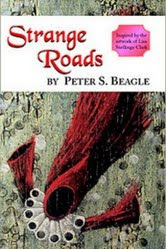 Strange Roads is a short collection of three original stories from writer Peter S. Beagle. Published by DreamHaven Books, a Minneapolis based specialty bookstore, Strange Roads was limited to 1000 printed copies. The three stories collected in Strange Roads are “King Pelles the Sure”, “Spook”, and “Uncle Chaim and Aunt Rifke and the Angel”. “Uncle Chaim and Aunt Rifke and the Angel” is also nominated the World Fantasy Award as Best Novella, and has been reprinted in Jonathan Strahan’s The Best Science Fiction and Fantasy of the Year, Volume Three.

This is a slim volume, only 69 pages, but the three stories contained within these 69 pages are impressive works of Peter Beagles imagination.

The collection opens with “King Pelles the Sure”, the story of a monarch of a small unnamed nation. This nation is peaceful and filled with happy people. Even the peasants. Everyone except King Pelles, of course. King Pelles dreams of war and glory, but only a small war without much killing. Just the glory and excitement would be enough, and then the nation could go back to its peaceful and tranquil ways. The Grand Vizier, the King’s advisor, advises against this course of action (as advisors are wont to do), but the King is insistent. Pelles gets his war and, being a war, is neither small nor glorious.

The story begins with a slight air of fable, and at its core “King Pelles the Sure” is a story of a lesson learned, but Beagle tells this story with such a gentle touch that even through the devestation readers can’t help but be charmed. It’s a story about how one handles mistakes and owns up in the end, a story about what people leave behind, and a story about how the words and deeds of a person can live on. In terms of what happens to the characters I don’t know that the story ends well, but for the readers “King Pelles the Sure” ends well indeed.

The second story in Strange Roads is “Spook”, a more modern tale which features three men, a ghost, and a duel of bad poetry. Seriously. The opening of the story did not hook me in right away, but the concept of a 170 year dead ghost believing a modern man was his murderer and challenging the man to a duel is outstanding. It gets better from there when the man has the choice of weapons and selects Bad Poetry to the death. The poetry is bad (and is excerpted as part of the story), but contextually funny and the reactions of the characters (including the ghost) is outstanding. The funny is not knee slappingly outrageous, but the second half of “Spook” makes it a funny story. In the end, “Spook” is a better story than I originally expected. It is the least of the three stories in Strange Roads, but it’s a good tale.

Beagle closes the collection with the World Fantasy Award nominated novella “Uncle Chaim and Aunt Rifke and the Angel”. Narrated by the ten year old nephew of Uncle Chaim, this story deals with what happens when an angel demands to be the muse of a seventy six year old painter. The angel commands Chaim to paint only herself from that day forward. After some grumpy arguing, that is exactly what Chaim does. The story follows Chaim through the heady days of success and the growing suspicions of Aunt Rifke and even Chaim’s friend Jules. The conversations between Chaim and the angel suggest that something isn’t quite right, but in no way is Chaim is being harmed. Except for withdrawing only to paint, Chaim and his family is reaping financial benefits. But there are questions. Peter Beagle answers the questions and he does so in a graceful and beautiful way. By the end of “Uncle Chaim and Aunt Rifke and the Angel”, the one word that came to mind was “beautiful”

Uncle Chaim was silent for some time, squinting at her face from different angles and distances, even closing one eye from time to time. Finally he grumbled, more than half to himself, “I got a very bad feeling that we’re both supposed to learn something from this. Bad, bad feeling.” He filled the little glass for the first time that day, and went back to work. pg 46

Not that the other two stories were loud, but this is a quiet story. There is nothing flash here, but we are left with something quite wonderful in the end. A story of grace and power and beauty, a story that ends just when it needed to and leaves the reader satisfied.

With only 69 pages to Strange Roads, it is logical to ask how a collection this short is worthy of a World Fantasy Award nomination. Not that length should generally be a requirement of anything more than distinguishing between a short story, novella, and novel, but at this length the three stories would have to be special indeed to hold up against longer collections from Jeffrey Ford, Kelly Link, and Nisi Shawl (Shaun Tan is a special case here). Not having read the other four collections yet, it is difficult to say exactly how Strange Roads will stack up. On its own merits, Strange Roads is a strong collection of stories. There’s not a lot of content, but what content is here is quite good. I don’t know how I might answer someone who said that no matter how good it may be, a three story collection still isn’t enough for a nomination. These three stories are worthy (note the novella nomination) and Strange Roads feels longer than its page count.

This is all just to say that this is an excellent collection and one which is well worth tracking down a copy to read.


As kind of an afterword to this review, I wanted to briefly touch on the copy on the back cover of the book.

Peter S. Beagle presents three tales inspired by the engaging sculptures and paintings of Lisa Snellings-Clark. A collaboration characterized by the wonder inherent in each of the artists’ work, Strange Roads is a perfect companion to Strange Birds.


Final Afterword: All three stories were later published in Beagle's collection We Never Talk About My Brother. Expect a review of that volume in the next three weeks.
Posted by Joe on Monday, August 24, 2009
Email ThisBlogThis!Share to TwitterShare to FacebookShare to Pinterest
Labels: Peter S. Beagle, Strange Roads, World Fantasy Awards

Well, I've read all of the finalists in this category (the stories in Strange Roads are also in the 2009 collection, We Don't Talk About My Brother, that Tachyon released earlier this year) and it's fairly well-stacked. I would say that Ford's collection is slightly stronger than Link's, with Beagle's up there with the two of them. Tan's is often brilliant, but I think perhaps it would benefit more if the WFAs had a separate graphic novel category. Shawl's is very good, but a slight step behind the other four.

How's that for whetting an appetite for the others? :P

I recently came across your blog and have been reading along. I thought I would leave my first comment. I don't know what to say except that I have enjoyed reading. Nice blog. I will keep visiting this blog very often.

Susan: Thank you, do come back.

Larry: Consider my appetite whet. I finished Tan's collection over the weekend and I was both impressed and unsatisfied. I know with Tan it is impossible to divorce the images from the words (and one should not), but if I think of the stories as stories I don't know that they hold up. The images really carry the fiction, and while it strengthens the collection, I agree that a graphic category would be a better place for the work.

I've never read Nisi Shawl before, so that's the one I am most interested in reading. I have opinions of the Ford and Link without reading them (well, three of the stories in the Link were in her other two collections), so we'll see.