As I read through the Fantagraphics collections of the Peanuts comic strips, I am often struck by just how perfectly written some of the strips are.  Schulz can break your heart with just one panel, and with another show the quiet humanity and pricelessness of family or friendship.  I've looked for just those strips to share, but have had little luck.

Specifically, I wanted the October 11, 1980 strip which closes a story arc where Snoopy has been trying to figure out what exact kind bird Woodstock is and, in the end, suggests that maybe Woodstock is a duck.  When Woodstock is distraught at Snoopy's bad joke, the final panel is this perfect touching moment of reconciliation and friendship.  I could never find the strip online.

Today, I ran into another.

I found this one.  It speaks volumes.  Still couldn't find the Snoopy / Woodstock strip.

I also ran across a series of blog posts from one Trapper Jenn, MD listing out what she feels the 50 greatest Peanuts strips are.  She has good taste, though she doesn't count that Snoopy / Woodstock strip as one of them.

Best Novel: Who Fears Death, by Nnedi Okorafor
Best Novella: “The Maiden Flight of McAuley's Bellerophon”, by Elizabeth Hand
Best Short Fiction: “Fossil-Figures”, by Joyce Carol Oates
Best Anthology: My Mother She Killed Me, My Father He Ate Me, by Kate Bernheimer
Best Collection: What I Didn't See, by Karen Joy Fowler
Best Artist: Kinuko Y. Craft
Special Award, Professional: Marc Gascoigne, for Angry Robot
Special Award, Non-Professional: Alisa Krasnostein, for Twelfth Planet Press
Congratulations to all the winners AND all the nominees.
Now it's time to start catching up on all of the goodness I missed this year.
Posted by Joe on Sunday, October 30, 2011 No comments:
Email ThisBlogThis!Share to TwitterShare to FacebookShare to Pinterest
Labels: 2011, World Fantasy Awards 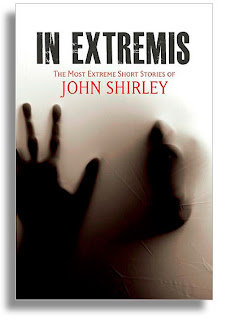 It occurs to me that I haven't heard much about Underland Press in a while, but they had two books published this year.
In Extremis, by John Shirley

In Extremis features more than twenty of Shirley’s most intense stories originally published in anthologies and periodicals like Asimov's Science Fiction, Cemetery Dance, and New Noir. In addition, this volume contains two never-before-published pieces that are sure to roil the genre’s most hardened readers.

The Other, by Matthew Hughes


Meet Luff Imbry, an insidiously clever confidence man . . . He likes good wine, good food, and good stolen goods, and he always maintains the upper hand. When a business rival gets the drop on him, he finds himself abandoned on Fulda—a far-off, isolated world with a history of its own. Unable to blend in and furious for revenge, Imbry has to rely on his infamous criminal wit to survive Fulda’s crusade to extinguish The Other.

Now, I have this inexplicable manner of deciding which books I want to read and simple descriptions tend to not play into it, but one thing that helps is history.  Underland Press is the publisher of The Pilo Family Circus, Last Days, and Finch.  Good stuff (and, in the case of Finch, great stuff).They've published a Joe Lansdale collection which I really have to read one of these days.  All of this is to say that I think I need to track down these two Underland books.
Posted by Joe on Friday, October 28, 2011 No comments:
Email ThisBlogThis!Share to TwitterShare to FacebookShare to Pinterest
Labels: Underland Press

That Dragon Griaule collection from Lucius Shepard that I've been dreaming about for years?


You can order it now.
Posted by Joe on Monday, October 24, 2011 No comments:
Email ThisBlogThis!Share to TwitterShare to FacebookShare to Pinterest
Labels: Lucius Shepard

The news is a good month old by this point, but I only just now have consistent internet access and wanted to share.

One of my more anticipated novels for the last couple of years is Jennifer Pelland's Machine.  I absolutely love her short fiction and can't wait to see what she will do at novel length (despite that I have, in fact, been waiting to find out).  Machine is forthcoming in late December from Apex Books. 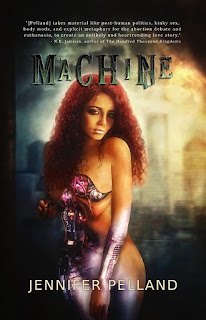 Disappointing news on the home front.  According to Locus, Dreamhaven Books is closing its doors at the end of January. Here is a copy of the e-mail sent out with the catalog.

I only shopped Dreamhaven perhaps once a year.  I like the store, it was just never part of my regular rotation.  That's probably part of the problem and why the store is closing. I always took for granted that the Twin Cities had two outstanding genre bookshops.  I saw Paolo Bacigalupi read from Pump Six there and bought the book on the spot.  It's a good store.  I don't really want to say "was", but that's about to happen in just a few months.

I wish Greg Ketter the best and hope that whatever his plans are for the future, that they are a smash hit.
Posted by Joe on Friday, October 21, 2011 No comments:
Email ThisBlogThis!Share to TwitterShare to FacebookShare to Pinterest
Labels: Dreamhaven Books 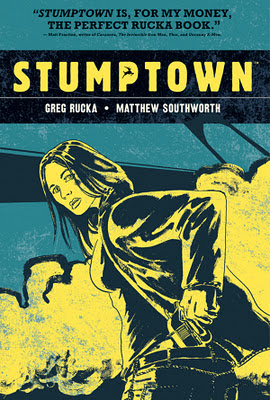 Stumptown features Dex Parios, a private investigator with shit luck at gambling. Down nearly eighteen grand to a casino, she is offered a case by the head of casino operations: find the missing granddaughter of Sue-Lynne Suppa, and the debt is erased.

Greg Rucka has worked on some of the biggest franchises from Marvel and DC Comics, but should be best known for his work on Queen & Country and Whiteout. Queen & Country is some of the best espionage fiction you're likely to run across, and given the difference in medium, I'd hold it up against prose fiction. It's damn good.

The thing about comic books is that where a writer can be so good on one series, his next work can fall flat and not meet the expectations his own excellence has set. Granted, this is true about anything, but I am a bit more hesitant with comics than with prose novels. Whiteout was good. Queen & Country was great. Could Stumptown even compare?

Charlotte Suppa has been missing for four days, and like any good detective story, Stumptown isn't quite so simple as “find the girl who ran away.” There's more to it, but not so much in a way that would begin to strain credulity. After telling personal stories on the world's stage with Queen & Country, Rucka tells a smaller story with Stumptown. Though the focus is on Dex's investigation, readers get a sense of Dex's life and personal story in an organic manner that serves both the macro story of the investigation as well as the micro story of introducing this new world. Rucka is very good at that balancing act. He does well with Dex's characterization and gives enough hints for the supporting cast to come alive as well.

Matthew Southworth's illustrations should also be commended. There is a certain washed out quality that serves the tone of the story while perfectly conveying who the characters are and what sort of world they inhabit. The art does its job, but it is more than simply serviceable. Matthew Southworth helps tell Rucka's story and with a different artist, we'd have an entirely different book – and probably not as good as the one we have now.

The four issues collected in Volume One cover “The Case of the Girl Who Took her Shampoo (But Left her Mini).” That title is the only bit of cheese to be found in the book. The only collected edition available is the hardcover that'll run you in the neighborhood of $30, but it's well worth checking out. One can only hope that Rucka has more Stumptown books in the works and that Southworth will be back doing the illustrations.  This interview suggests that there is.
Posted by Joe on Thursday, October 20, 2011 3 comments:
Email ThisBlogThis!Share to TwitterShare to FacebookShare to Pinterest
Labels: comics, Greg Rucka
Newer Posts Older Posts Home
Subscribe to: Posts (Atom)
I also blog at Nerds of a Feather
Follow @joesherry