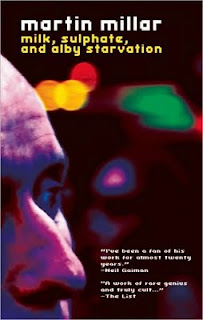 Here’s a short novel that is just about as bizarre as they come. Alby is a 26 year old paranoid who believes nearly everybody is out to get him, either for his rare comic collection or because he is the cause of the drastic decline in sales of milk. The thing about being paranoid is that when folks really are out to get you, you’re not wrong. Of course, Alby sees enemies everywhere and his actions are increasingly erratic.

We’ll gloss over the comic collection and talk about milk for a moment. See, Alby had been consistently telling his doctor that he was sick and the doctor consistently told Alby that nothing was wrong with him. But when Alby tried a new diet where he fasted for five days, gradually added simple food items back into his diet, and discovered he was allergic to milk. That should have been the end of it, except Alby told someone else about the diet and that person was also allergic to milk. That person brought another to Alby to learn about the diet, and quite soon there was an epidemic of people believing they were allergic to milk. Alby achieved a certain level of notoriety with his “starvation diet” and milk sales plummeted with the newfound fear of milk. Taking steps to eliminate Alby and regain profits, the Milk Marketing Board hires assassins to kill Alby. Yes, people really are out to get Alby.

There are a number of storylines which will eventually converge into one big mélange of dénouement. There are two Chinese guys, Cheng and Wu, who were once friends and now rivals at the arcade. Their contests are the stuff of legends and when they play, everybody else watches. There is June, the assassin hired to kill Alby. June goes about her work and generally doesn’t like people. There are Fran and Julie, two party girls who are Alby’s friends. There is a University Professor digging for the lost crown of Ethelred the Unready and a psychic woman watching him. There’s a bunch of things going on in this novel that do not seem to have any connection to Alby’s storyline. That’s the crazy thing about Milk, Sulphate, and Alby Starvation. In such a slim volume, Martin Millar packs in a number of stories and a variety of strange concepts (The Milk Marketing Board hiring contract killers, for one. The Big Value subplot is another)

Milk, Sulphate, and Alby Starvation is a crazed semi-gonzo novel with an extraordinarily unlikeable and uninteresting protagonist. The front cover has a positive blurb from Neil Gaiman and I believe the novel gets at a certain punk sensibility in which the ravings of a deluded man can really change the “system” and get an “average” guy involved with some pretty crazy people. I believe this is a novel that engages some readers on a level that I just don’t have. That Milk, Sulphate, and Alby Starvation is a novel which has a number of admirers is something I do understand, but this is a novel which I failed to engage with on any level. Though the novel is only 170 pages, I hoped for an assassination of Alby in the first third of the novel so that I didn’t have to read his paranoid whinings anymore. The semi-random side stories seemed to be exactly that, random. They are not, of course, because the conclusion to the novel brings absolutely everything together in one big shmoz.

Readers who appreciated A Clockwork Orange or Trainspotting (the books or the films) may well find much to enjoy with Milk, Sulphate, and Alby Starvation. It’s that kind of story. Only problem here is that I am not the audience for that kind of story and as such, cannot truly judge how successful Martin Millar was in telling this story. That Soft Skull reprinted the novel some 20 years after it was first published would suggest that Millar was quite successful in his storytelling. If you like this sort of story, it’s likely worth checking out. It’s just not for me.