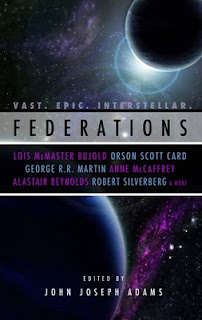 Though he has only been editing anthologies for a two years, John Joseph Adams has been quite prolific. With his first anthology appearing on shelves January 2008 (the excellent Wastelands), Federations in his fourth anthology. Two more are still due this year (By Blood We Live, and The Improbable Adventures of Sherlock Holmes), two in 2010 (The Living Dead 2, The Way of the Wizard), and one so far for 2011 (Brave New Worlds). Expect more from Adams. What should be evident by this point is that JJA has an excellent eye for picking out a good story, be it a reprint or a never before published piece of fiction. With Federations John Joseph Adams blends stories original to this anthology with reprint stories from the likes of George R. R. Martin, Alastair Reynolds, Robert J. Sawyer, and Anne McCaffrey.

In the introduction, Adams writes,

These classic federations have revealed and shaped much of American life. But with this anthology, we look to see what comes next. What will the interstellar federations of the future look like now that our society accepts (for the most part) racial and gender equality?...There will always be federations on the horizon, in our future, describing who we wish we were, or might become.

Through a blend of reprints from the masters and stories original to this anthology, Federations does exactly that. The strongest story in this anthology is Robert J. Sawyer’s “The Shoulders of the Giants.” This is a story which takes the idea of the first interstellar ship sent out from Earth to colonize another world. Twelve hundred years to the world of Soror and the colonists come out of cryo-freeze to find that what they left Earth so long ago to do have long been done. On one hand this is a sad story because it is a dream that when realized is nothing like what it was supposed to have been. But, it is a story that recognizes that everything that humanity has accomplished is built upon the shoulders of those who came before. It’s a beautiful story. It’s worth the price of admission.

Alastair Reynolds delivers another standout with “Spirey and the Queen”, and “Warship” by George R. R. Martin and George Guthridge is a short and dark tale of plague on a starship. The reprints offer some serious quality, but the original stories stand up well.

L.E. Modesitt Jr delivers a solid story in “Life-Suspension”, as does Yoon Ha Lee with “Swanwatch”. “Swanwatch” is a story of an impossible exile, a life sentence with a once a decade chance to product an artistic masterpiece so good that the judges will commute the sentence. Allen Steele tells a new Coyote story with “The Other Side of Jordan”, which is a world I’m not familiar with but the story is enough to make me want to find out more. “Eskhara” from Trent Hergenrader is another solid one.

Usually an anthology can be considered to be worth reading when the good stories outweigh the bad, and with any luck there are will be one truly standout story. Federations is so much more than that. There are only a couple stories which actually disappoint (the John C. Wright is the most glaring example), most stories are more than just good, and a couple rise to be truly excellent (Robert J. Sawyer’s contribution stands out). Federations is an outstanding anthology.