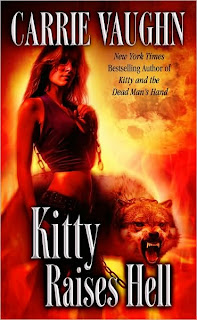 
With her sixth Kitty Norville novel Carrie Vaughn offers the first truly direct sequel of the series. Kitty Raises Hell directly follows the events of Kitty and the Dead Man’s Hand. After Kitty’s wedding in Las Vegas (this is nothing like Zach and Kelly’s Saved By the Bell wedding, by the way) and accompanying adventures and conflicts with a troupe of performing werewolves attempting to resurrect Tiamat, an ancient demon, she returned back home to Denver knowing she left enemies in Vegas.

Carrie Vaughn remains at the top of her game. By the sixth book of any series, the characters and the setting and the situations are no longer shiny and new. The new story smell has worn off. To maintain the interest of readers by this point the author just has to be good. Tell a good story. Vaughn succeeds. Kitty faces unexplainable supernatural attacks, interacts with the crew of Paradox PI (a show very similar to Ghost Hunters), and is introduced to what may be a major conflict in future volumes though it is only a minor one here. See, a vampire comes to town and for vampires Denver is Rick’s town. He is the Master. The new vampire offers a solution to Kitty’s problems, but Kitty doesn’t trust this new vampire. The offer is too good to be true, and Kitty knows how the saying goes.

Regarding Paradox PI...this is an aspect of the novel that was very well done. The introduction initially seems to be ripping the show Ghost Hunters.

The whole thing had a reality-TV aesthetic, lots of shaky video footage of people talking, the occasional expletive bleeped out. It promoted a sense of artificial urgency. They'd never come up with something as definitive as an image of Jacob Marley rattling his chains, but they always pretended that they might. Bottom line: It was a TV show, not paranormal investigation.

Kitty's viewpoint damn near castigates the show, but when she meets up with the crew she realizes that though the show has its own presentation, the investigators are really trying to prove (or disprove) as much as they can knowing full well that any evidence is shaky. It's respectful, and that's cool.

What works so well in Kitty Raises Hell is that Carrie Vaughn introduces new elements to her world, and does so in a natural way. She has Kitty question things in her job as a radio host, and she shows different perspectives as to what may be possible and what Kitty herself believes. Vaughn doesn’t make things clear cut and, in a sense, has Kitty play the role of the skeptical audience. This, along with Kitty being a likeable and relatable (for being a werewolf) lead character really drives the novel. There are challenges and Kitty would rather hide away but stands and faces and investigates and solves. It’s not that Kitty Norville is wish-fulfillment, but Carrie Vaughn consistently tells an entertaining story with a believable heroine who isn’t superwoman. Vaughn also raises the stakes and expands the reader’s understanding of this alternate (or semi-hidden) world of lycanthropes and vampires, which is also a world populated with real people.

Let’s just say that I remain impressed with Carrie Vaughn and the Kitty Norville series.


Previous Reviews
Kitty and the Midnight Hour
Kitty Goes to Washington
Kitty Takes a Holiday
Kitty and the Silver Bullet
Kitty and the Dead Man's Hand
Posted by Joe on Friday, August 28, 2009
Email ThisBlogThis!Share to TwitterShare to FacebookShare to Pinterest
Labels: Carrie Vaughn

The cover is a huge turnoff. It's not marketing to me, that's for sure.