Over at Tor.com, Liz Bourke has a review of Elizabeth Bear's Grail.  Since I haven't been able to wrap my head around what I want to say about the book, Bourke's review will have to do.

I will say that I highly recommend the Jacob's ladder trilogy.  Start with Dust.
Posted by Joe on Monday, February 28, 2011 1 comment:
Email ThisBlogThis!Share to TwitterShare to FacebookShare to Pinterest
Labels: Elizabeth Bear

Years ago, after floundering without a focus for this blog, I set a couple of ground rules for what this blog would be about and what sort of content I would allow myself to post. This was never written out, but it was what occurred in my head to give the blog a particular shape and flavor.

First: This would be about books and stories and storytellers. Genre didn’t matter, though I have particular interests that I choose to write about more often than others. I just wanted to focus on the cool stuff folks were writing, fiction (and nonfiction) that got me excited.

Third: No blatant promotion unless it was something I was already excited about or could self-justify why I should promote a particular book or event. Press releases were few and far between and were only posted when I really wanted to amplify the signal. If you wanted to take the position that any blogging is promotion, I can’t argue the point, but I would say that most blogging is done for personal reasons and I talk up the folks who excite me as a reader. You’ve likely noticed particular writers who get mentioned far more often here than others, sometimes years before there is a hint of a novel on the horizon. There’s a reason for that and it isn’t because any of them asked me to.

Fourth: Nothing personal. This is a book blog. It’s not about my life. It’s about the stuff I like to read. I’ve done personal journaling over the years in other places and that’s fine, but this wasn’t the place for that. Also, I just don't like talking about myself.


Seven months ago, back in July, I enlisted in the Air Force Reserve. Since then I’ve been either waiting to find out what jobs were available, waiting to receive a ship date to leave for Basic Training, or waiting to actually leave for BMT. The key word here is “waiting”. Unless I do something really stupid and get hit by a car, in three days the waiting will be over and I’ll leave for BMT and then Tech School where I’ll train to be a Med Tech.

What this means for you is that for two months I will have next to no contact with the outside world and for the five months after that I’ll be studying my butt off trying to wrap myself around the medical stuff, getting my EMT-B certification, and generally being busy. Any reading time I have will be study time. I’m rather excited about the opportunity. Turning 32 while in BMT, I’ll be one of the older recruits there (Active Duty has a 27yr age limit, Reserve is 35) and will have to work just a little bit harder to keep up with the youthful energy I’ve grown out of. That’s fine. Grandpa here can keep up with the kids.

This would normally be about the time I would announce that the blog is going on hiatus and all four of my readers will be lamenting the demise of the blog. That’s what normally happens, right? Blogger says he is taking a break and then never comes back. Well, I’m going Reserve, not Active Duty, so once my training is done I’ll be back home doing the traditional Reserve duty and will have pretty much the same amount of personal time as I do now to haphazardly blog.

But! I have a treat!

While I am going on hiatus, this blog is not. A number of awesome people have graciously agreed to contribute some of their time and guest blog for me while I’m away. There’s no set schedule for this, but considering how infrequently I’ve been posting, I can’t say that I have room to judge. Plus, busy people are busy and I appreciate the assistance.

Kelly Barnhill: Kelly is the author of the forthcoming YA novel The Mostly True Story of Jack and a bunch of really cool stories, most recently “The Taxidermist's Other Wife”. Oh, and she's super duper awesome.

Jennifer Pelland: Jennifer is the author of some kick ass short fiction, twice nominated for a Nebula Award (“Captive Girl” and “Ghosts of New York”). Her short story collection Unwelcome Bodies was published in 2008 and her debut novel, Machine, is due out in 2011. I am terribly excited to read it.

John Picacio: Artist Extraordinaire. John has been nominated for a number of Hugo Awards and has won a World Fantasy Award. You may have seen some of his work.

Codename V: You don't know her, but she is awesomesauce.

Alison McGhee: Alison writes wonderful books. I cannot recommend Rainlight or All Rivers Flow to the Sea highly enough. She'll break your heart with the turn of a word. Alison is a # 1 New York Times best selling author and her novel Shadow Baby was nominated for a Pulitzer Prize.


Yes, this blog is now exponentially cooler than it was yesterday.
Posted by Joe on Friday, February 25, 2011 9 comments:
Email ThisBlogThis!Share to TwitterShare to FacebookShare to Pinterest

The Science Fiction and Fantasy Writers of America have announced the nominees for the 2010 Nebula Awards.


(some of the story links may only be available for the next couple of months, this is just something that happens with the awards.  get them while they are hot)

Novelette
“Map of Seventeen”, by Christopher Barzak (The Beastly Bride)
“The Jaguar House, in Shadow”, by Aliette de Bodard (Asimov’s, July 2010)
“The Fortuitous Meeting of Gerard van Oost and Oludara”, by Christopher Kastensmidt (Realms of Fantasy, Apr 2010)
“Plus or Minus”, by James Patrick Kelly (Asimov’s, Dec 2010)
“Pishaach”, by Shweta Narayan (The Beastly Bride)
“The Leviathan, Whom Thou Hast Made”, by Eric James Stone (Analog, Sept 2010)
“Stone Wall Truth”, by Caroline M. Yoachim (Asimov’s, Feb 2010)


Congratulations to all the nominees!


I would like to take this moment to offer up extra congrats to Jennifer Pelland, Rachel Swirsky, Aliette de Bodard, and Mary Robinette Kowal. I’ve been following Jennifer, Rachel, and Mary’s work for years and it’s awesome to see these nominations. This marks Pelland’s second Nebula nomination (previously, “Captive Girl”), Rachel’s second (“A Memory of Wind”), and Mary’s first (her story “Evil Robot Monkey” was nominated for a Hugo, and she is a winner of the John W. Campbell Award for Best New Writer). I’ve only recently come to discover Aliette, but her novel Servant of the Underworld was quite excellent. I’m glad to see each of them pick up nominations this year.
Posted by Joe on Tuesday, February 22, 2011 1 comment:
Email ThisBlogThis!Share to TwitterShare to FacebookShare to Pinterest
Labels: Nebula Awards

a collection of new books 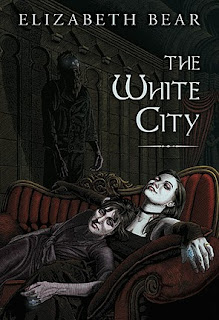 I've been on a book buying spree lately and have brought in a host of new books to the welcoming embrace of my bookshelves.  Yes, I really do buy books, too.  This post was just long overdue.  I should really have updated sooner.  I think I've forgotten some stuff that I purchased a couple months ago.

New
The Alchemist, by Paolo Bacigalupi
The White City, by Elizabeth Bear
The Executioness, by Tobias Buckell
The Strange Case of the Dead Bird on the Night Stand, by Emma Bull and Kyle Cassidy
Dread Island, by Joe R. Lansdale
A Companion to Wolves, by Sarah Monette and Elizabeth Bear
Bloodshot, by Cherie Priest
Holiday, by M. Rickert 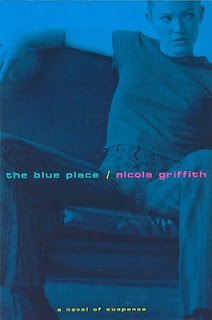 
Used
A Shadow in Summer, by Daniel Abraham
The Gypsy, by Steven Brust and Megan Lindholm
Cowboy Feng's Space Bar and Grill, by Steven Brust
Solitaire, by Kelley Eskridge
The Blue Place, by Nicola Griffith
The Golden Key, by Melanie Rawn, Jennifer Roberson, and Kate Elliott
Natural History, by Justina Robson
The Sparrow, by Mary Doria Russell
Children of God, by Mary Doria Russell
Posted by Joe on Sunday, February 20, 2011 5 comments:
Email ThisBlogThis!Share to TwitterShare to FacebookShare to Pinterest 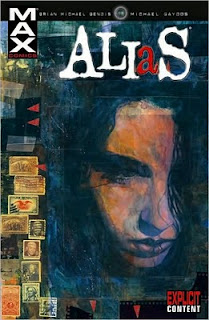 *two hours later, I figured it out.
Posted by Joe on Sunday, February 13, 2011 No comments:
Email ThisBlogThis!Share to TwitterShare to FacebookShare to Pinterest
Labels: Brian Michael Bendis

Libraries really are wonderful. They’re better than bookshops, even. I mean bookshops make a profit selling you books, but libraries just sit there lending you books quietly out of the goodness of their hearts.


Interlibrary loans are a wonder of the world and a glory of civilization.

Jonathan Strahan has posted the table of contents for the forthcoming (and hotly anticipated around these parts) Eclipse Four.

Exciting book is exciting.   As has been since the first book, Eclipse is a must read series.
Posted by Joe on Friday, February 04, 2011 3 comments:
Email ThisBlogThis!Share to TwitterShare to FacebookShare to Pinterest
Labels: Eclipse Four, Jonathan Strahan
Newer Posts Older Posts Home
Subscribe to: Posts (Atom)
I also blog at Nerds of a Feather
Follow @joesherry