Welcome to the latest installment of "Stuff I'm Looking Forward To This Year". As always, I take my information from the Locus Forthcoming list, plus a little bit of extra research when I'm aware of things that should be on the Locus list and are not.

January
The White City, by Elizabeth Bear: The third novella / book, following New Amsterdam and Seven for a Secret.  The more I read in this series, the more I want.

February
The Sea Thy Mistress, by Elizabeth Bear.  I have an ARC in my hands right now.  This is the third book of Bear's excellent Edda of Burdens trilogy.  The first two are All the Windwracked Stars and By the Mountain Bound.  FANTASTIC stuff.

Harbinger of the Storm, by Aliette de Bodard: This is the sequel to Servant of the Underworld, which I have not read.  That first book is on my library hold list, so I suppose I don't know for sure that this should be one of my anticipated books, but this historical fantasy / mystery set in the world of the Aztecs is something new and fresh that you don't see every day.  It should be worth keeping an eye on.

Down to the Bone, by Justina Robson: This is a UK only release for now, but Down to the Bone is the fifth volume in Robson's excellent Quantum Gravity series.  The first four were released in the US by Pyr.  I assume we'll see it in the States sometimes in 2011 or 2012.  Hopefully Pyr is picking it up.  They've put out great looking editions of the first four.


March
Grail, by Elizabeth Bear: Hey look, three months, three books by eBear!   This is the third volume of the Jacob's Ladder trilogy.  I favorably reviewed the first book, Dust, and I should really get around to reviewing the second, Chill (it's even better than the first!).

The Republic of Thieves, by Scott Lynch: Is it possible?  Might it really?


The Best Science Fiction and Fantasy of the Year, Volume Five, by Jonathan Strahan: My favorite Year's Best anthology series.  I'm collecting these like candy.


Lots of good stuff coming in 2011.
Posted by Joe on Tuesday, November 30, 2010 8 comments:
Email ThisBlogThis!Share to TwitterShare to FacebookShare to Pinterest
Labels: 2011

The Chronicles of the Raven 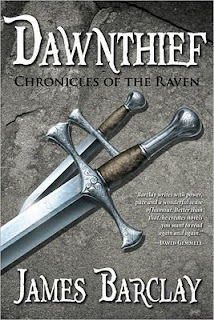 I never wrote about the three books of James Barclay's The Chronicles of the Raven back when I first read them earlier this year.

This is the sort of stuff I would have loved beyond all recognition when I first discovered fantasy as a teenager.  It works as something of a bridge of the more simpler and safer quest fantasies of the 1980's (the stuff readers of my generation grew up on) and the nastier, more violent stuff written by Joe Abercrombie and Matthew Stover.  Yes, there is enough room and time in the fantasy genre to drive several buses through that gap, and surely other writers have played and are playing in that gap, but Barclay's work here demonstrates how a traditional quest fantasy can be told, feel modern, and yet stand firmly in the tradition of those novels which came before.


Dawnthief came from a personal frustration with the pace, style and character matter of other fantasy novels I’d read and has its roots in role playing. I wanted my principal characters to already be the best at what they did and not the classic ‘stable boy becomes hero/king’ types. Having The Raven as mercenaries introduces a moral greyness which means readers can’t assume they’ll always do the ‘right’ thing.

The aim is to entertain readers and for me, the ideal reaction on reading Dawnthief would be ‘bloody good read that, think I’ll buy Noonshade‘ (as opposed to ‘crumbs what a fascinating insight into the human psyche, think I’ll go for a lie down’).

He succeeded.  Dawnthief, and the subsequent novels, are a bloody good read. 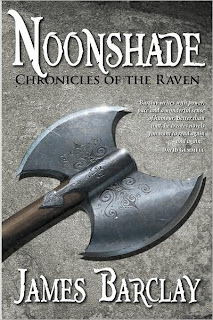 "The Raven" is a mercenary company loyal only to each other and the job, but circumstances has them fighting to save their world.  It's not quite as cliche as it sounds, but this is part of where the bridge lies.  The Chronicles of the Raven has its roots in the traditions of quest fantasies, but that moral ambiguity is important.  These are men (and an elf) fighting for the right thing, but not necessarily all for the right reasons.  The action is quite a bit more stark and in-your-face than in those earlier fantasies.  Ass is kicked and there are questions regarding the true safety of the heroes that don't exist in the fantasies of the 1980's and the early 1990's.

The reason I continue to bring up a decade some twenty years in the past is that, admittedly, The Chronicles of the Raven is an answer to the books of that decade.  The conversation Barclay is having is not so much with his contemporaries or even those writers who began publishing in the 1990's, and the tone of that conversation is evident in the three novels.  It is important to note that Dawnthief was originally published in the UK in 1999.  It is less a novel of the last ten years as it is the ten years prior to that. 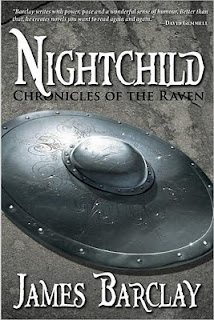 The obvious contemporary comparison here is Joe Abercrombie and readers won't taste the dirt on their teeth with Barclay as they will with Abercrombie.  That's neither a bad thing nor a good thing.  It's just a thing and why I consider The Chronicles of the Raven to be something of a "bridge" between two styles of quest-fantasy storytelling. Readers who cut their teeth on David Eddings, Terry Brooks, Tad Williams, and Raymond Feist, and who are still looking for a good fantasy in that tradition with just a bit of an edge to it will love James Barclay.  Readers digging on the newer fantasy writers on the scene will find Barclay a touch lighter than some of the new stuff, but should still find themselves pulled away by a well told story.


The bottom line here is that The Chronicles of the Raven is, as James Barclay hoped, a "bloody good read".  Having finished these books early in 2010, I have recently received copies of the first two books of the next series Legends of the Raven.  Seeing those new books on my shelf has me itching to delve back into the world of Balaia.  It's good stuff, y'all.
Posted by Joe on Monday, November 29, 2010 4 comments:
Email ThisBlogThis!Share to TwitterShare to FacebookShare to Pinterest
Labels: James Barclay

Strange Horizons, change is in the air

A day after winning a World Fantasy Award for her work on Strange Horizons, Susan Marie Groppi announced that she was stepping down as Editor in Chief of Strange Horizons.

Taking her place is Niall Harrison, the previous Reviews Editor at Strange Horizons.  Abigail Nussbaum will take Niall's position as head of the Reviews department.  Good choices, both of them.  Niall and Abigail are smart folk.

Strange Horizons remains one of the premier places to find great short fiction, often from writers who are just beginning to make a name for themselves in the genre (as well as from more established writers).  Their book reviews are just as good.

I expect Niall and Abigail will maintain the high standards of Strange Horizons and continue to deliver excellent fiction and nonfiction.  Congrats to them, and best of luck to Susan Groppi.

Now it's time to go check out some of that excellent fiction over there.
Posted by Joe on Tuesday, November 02, 2010 1 comment:
Email ThisBlogThis!Share to TwitterShare to FacebookShare to Pinterest
Labels: Strange Horizons

Sweet!  Just found out that there is going to be a follow up to Diving Into the Wreck (one of the best books of last year that I haven't written about) called City of Ruins.  There's a cover and everything.

I don't need to know anything else about it, except that it exists.  Diving Into the Wreck was so good that I immediately tracked down a copy of the first Retrieval Artist novel Rusch wrote.  Haven't read it yet, but clearly I must.
Posted by Joe on Monday, November 01, 2010 2 comments:
Email ThisBlogThis!Share to TwitterShare to FacebookShare to Pinterest
Labels: Kristine Kathryn Rusch
Newer Posts Older Posts Home
Subscribe to: Posts (Atom)
I also blog at Nerds of a Feather
Follow @joesherry