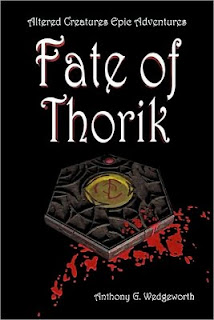 Okay, y'all. I know I have a general policy of not reading self-published books, but this is a special situation. I received a review copy to review this book elsewhere and at that time, neither party realized this was self-published. The fact that it was precluded publication elsewhere and it sat in limbo for a few months.

Now it is free, and this one is so special I just had to share it with all of you. Also note that this is being gentle and an attempt to be both fair and professional in the review. Did I succeed?

PS: I think George Lucas needs to sue someone, because I kept waiting for a brownie to scream out "I stole the baby! I stole him from a stupid daikini who was taking a pee pee!" I also expected Thorik Dain to be called a peck, and someone to find Cherlindrea's Wand. Seriously. I'm half tempted to re-write this damn thing for humor, but we'll just go with what I originally wrote back in April.

Also, the above was not part of the fair review. The below is.


With a five page prologue Anthony Wedgeworth introduces readers to the world of Terra Australis, a land in danger. “Now that the council members are dead, no one else knows of the upcoming attack. The fate of the land now rest on my shoulders. Its imperative that I survive,” thinks the wizard Ambrosius. After the prologue the true story of Fate of Thorik begins. The reader is introduced to Thorik Dain, a sixteen year old polenum. Num, for short, as nums are dwarf / hobbit / nelwyn-esque. The polenum of Thorik’s village find Ambrosius injured and nurse him back to health. Ambrosius convinces Thorik to help him save the world. Joining Ambrosius and Thorik are a small band of Num.

Thus the stock epic-fantasy traveling party is assembled and the journey begun. The one difference here is that rather than a band of dwarves, or human rangers, Thorik’s party consists of his disapproving teacher, a child, a pretty she-num, Thorik’s primary rival, and Thorik’s borderline Alzheimer’s suffering grandmother who, of course, dispenses wisdom like candy. Not the stock troupe, but soon they join with a pacifist giant and a dragon named Draq. Really.
Fate of Thorik is a standard fantasy quest novel. Young man has a destiny beyond his mundane existence and with the appearance of a mysterious stranger, will spend at least one novel chasing that destiny. Many fantasy novels use this basic set up in a variety of ways. The best of them are so good that even when the author follows the carefully charted map the reader does not mind, or even notice until later reflection. Fate of Thorik follows a fairly generic story-map, but unfortunately Wedgeworth’s skill is not up to the task.

This is a poorly written, poorly edited novel. The quote from the first paragraph of this review is a good example. Page 53 offers another.

“His heart raced, chest tightened and emotions upset his stomach. Terrified to follow her lead he had the same level of desire to let go of his self-inflicted inhibitions and be free. Closing his eyes, he swallowed and chose the latter.”

This is not simply three sentences taken out of context. This is representative of what readers can expect to find in the novel. With stronger prose readers may overlook other flaws. With this sort of prose readers will notice that on page 26 Ambrosius refers to December 13. Anthony Wedgeworth certainly does not need to come up with strange and creative ways to name the months in Terra Australis, but December pulls the reader out of the story (assuming the reader was ever in the story). The anachronism grates. On the other hand, Wedgeworth has given far more creative names to the various creatures populating Fate of Thorik. Chuttlebeats, ov’unday, blothrud, and bandercats are only some of what readers can expect to find in this novel. Readers might have overlooked the multiple mentions of marshal law. Whether this is an instance of poor editing, a simple mistake, or ignorance, there is little question that the context is martial law. It is distracting, but Fate of Thorik is one instance after another like this, to the point that when Ambrosius mentions that a ride may be a smooth as “yakka cream” the only response available is to laugh. What else is left?

This ignores that each chapter is given a “Historical Date”. The novel opens on the Historical Date of 4.0649.0913. This breaks out to the 4th Age, 649th Year, 9th Month, 13th Day. Specific dates are not overly important in a fantasy novel (or in most novels), but having to translate the timecode each chapter is a bit much. It is just one more thing.

All of this is to say that Fate of Thorik is to be avoided. To say that there are better novels out there would be to suggest that the sky is blue or that water is wet.
Posted by Joe on Monday, August 17, 2009
Email ThisBlogThis!Share to TwitterShare to FacebookShare to Pinterest

Thank you for the warning!