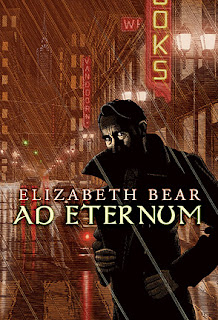 Subterranean Press has revealed the cover to Elizabeth Bear's forthcoming novella ad eternum, which is likely to be the last of the Abby Irene novellas (though, giving the era for this one, we're unlikely to actually see Abby Irene - it's just how I think about the story series).

Love the cover, can't wait to read it.  Though, I should really read The White City first.

Below are my nominations for the 2012 Hugo Awards.  I did the best I could to read broadly the last couple of months, but because I was away for most of this year, there are some areas where I would have liked to have read more.  Regardless, I feel good about what is on my ballot.  I have omitted the categories in which I did not nominate.

Remember, if you wish to nominate, you must have at least purchased a supporting membership to Chicon by January 31. Nominations are due by March 11. If you don't have a supporting membership, it may be worth it to still purchase one. You'll be able to vote on the final ballot, nominate in 2013, and if there is a Hugo Voter's Packet again this year, you'll be able to get electronic copies of most of the final nominees - including the novels. Totally worth it, if you have the money to spare.

The Sea Thy Mistress, by Elizabeth Bear
Among Others, by Jo Walton
Mechanique, by Genevieve Valentine
Harbinger of the Storm, by Aliette de Bodard
The Sacred Band, by David Anthony Durham

"Simulacrum", by Ken Liu
"Her Husband's Hands", by Adam-Troy Castro
"The Cartographer Wasps and the Anarchist Bees", by E. Lily Yu
"Paper Menagerie", by Ken Liu
"Movement", by Nancy Fulda

Editor Long Form is the one category that I wish I had done significantly more research for.

Professional Artist would be the other, but this is a solid lineup.

I have had issues with this category for years now and this is why.  Blogs tend to not be eligible because of "discreet issues", which is bullshit (but the rule).  Modern fanwriting is occurring in blogs and while there is plenty of garbage out there (welcome to my dungheap), that's the case with anything, including fanzines.  I think that blogs do exactly what fanzines used to do (and still do), only with greater accessibility.  Bah!  I could probably rant about this for a while.  I won't.

Shit.  I just realized I forgot to vote for Abigail Nussbaum.