The winners of the 2010 World Fantasy Awards have been announced.

Congratulations to all the winners, with special congrats to Jonathan Strahan and Susan Marie Groppi.  Strahan is a fantastic anthologist and Groppi is the editor of Strange Horizons, one of my favorite places to find short fiction.
Posted by Joe on Sunday, October 31, 2010 1 comment:
Email ThisBlogThis!Share to TwitterShare to FacebookShare to Pinterest
Labels: World Fantasy Awards 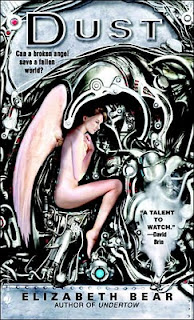 On her website, Elizabeth Bear had this to say about Dust (and the trilogy as a whole):

This is a trilogy of novels set aboard a derelict generation ship in orbit around a dying sun. It's much more space opera and sweeping than the Jenny books, Carnival, or Undertow, which is to say that it has more of a quest or adventure sensibility and somewhat less intrigue and politicking. I described it to my editor in the pitch as "Amber:Gormenghast::Upstairs:Downstairs, in SPAAAAAAAAAACE!"

And she bought it, so you know, I kind of hope the same pitch works on you.

The first novel, Dust, is about two young women, Rien and Perceval, who meet under unkind circumstances and form a fragile alliance in an attempt to prevent a potentially devastating war. However, unbeknownst to them, they have attracted the attention of the flickering hulk of the dead ship's A.I...

Bioengineering, ancient betrayals, and spunky teenaged heroines. Also, an Elric parody. How can you say no?

Now, I’ll admit that the pitch itself wasn’t a strong sell for me, but I trust Bear and her set-up for the novel itself is intriguing. Moreso than the pitch.

The bioengineering here is important because Perceval is described as an angel who has had her wings cut off after she surrendered, and there are references to other angels, God, aspects of godhood, and the Elect. Among other things. Yet, as Bear states, this is set “aboard a derelict generation ship in orbit around a dying sun”. The contrast between what might elsewhere be religious in nature and concepts which are very much science fiction works very well here, though readers will likely spend some time trying to figure out exactly how these concepts fit together.

One of the things I have most appreciated about Bear’s fiction is her use of broken characters. Most of her characters, human or otherwise, are damaged in some manner. This makes them…like people. They aren’t flawed, per se, but more fully realized in how life and experience affects and alters an individual, not always in ways that are comfortable or pleasant. Except that these are the characters that lend themselves to beautiful writing and haunting stories. These are the characters which come across as more “real”.

Characterization tends to be one of the strongest aspects of Elizabeth Bear’s fiction (see her Stratford Man duology), but perhaps because the perspective is so much more tightly focused on Rien and Perceval, they are the only two characters who stand out as clearly defined characters. The other characters are much less…vibrant, or alive. Compared to Bear’s previous novels, this is a bit of a surprise, but it does permit the focus to be solely on Perceval and Rien. The actions of the other characters are important, and have ramifications for the next novel, Chill, and beyond, but they aren’t quite as important and immediate as the personal drama and adventure of the two protagonists. Though necessary to the story being told, the other characters just do not add the narrative weight and richness Bear’s readers have come to expect. On the other hand, Dust also contains a nano-tech improved power-tool named Gavin with a certain amount of sentience which has transformed itself into a basilisk. The awesomeness of Gavin can not be overstated.

Whether it is the adventure aspect of the novel or the strong characterization of Rien and Perceval which allowed an emotional bond to build, Dust has become one of my favorite novels from Elizabeth Bear. Dust is right up there with, though a step behind, her Promethean Age novels. This is high praise. The raw inventiveness in the worldbuilding is stunning, even as there is a sense of bewilderment at how all these disparate elements fit together. Dust is a novel which should not be overlooked.

Blood and Iron
Whiskey and Water
Ink and Steel
Hell and Earth
Hammered
Scardown
New Amsterdam
Seven for a Secret
A Companion to Wolves
All the Windwracked Stars
By the Mountain Bound
Posted by Joe on Friday, October 22, 2010 2 comments:
Email ThisBlogThis!Share to TwitterShare to FacebookShare to Pinterest
Labels: Elizabeth Bear

Not too long after she announced a new home for the Detective Inspector Chen series, Liz Williams has a new announcement.


I have signed a 3 book deal with Prime Books. It's called Worldsoul and it's about a stolen library, an unstable monorail, several renegade sphinxes and much else besides. It's more fantasy than SF. The first novel will be coming out either next year or early 2012,

Great news and looking forward to these! A stolen library AND an unstable monorail?  Hell yeah!
Posted by Joe on Tuesday, October 12, 2010 No comments:
Email ThisBlogThis!Share to TwitterShare to FacebookShare to Pinterest
Labels: Liz Williams

The Lifecycle of Software Objects, by Ted Chiang

For those who are interested, and this should be everyone, Subterranean Online has just published Ted Chiang's novella "The Lifecycle of Software Objects".

Chiang is not prolific and every time he publishes his stories tend to be one of the best published in a given year.  So, you'll want to go read this.

Honestly, though, this is one of the few times I've been disappointed in one of Chiang's stories.  There's supposed to be heart in the story, but Chiang left me feeling a bit cold towards the characters and that situation - which is never a good thing for me as a reader.  This is why I haven't talked about the story all year.  I had no idea what to really say.   Elizabeth Bear loved it, though. You can probably find scads of other positive reviews all over the place.


This is a descriptive work of science fiction, rather than a strongly plot-driven one. It’s meditative and thoughtful, and it does not offer tidy closure or resolution: just a series of ever-more-complicated questions.

I think this may be one of my issues, that more descriptive works challenge my reader-brain in ways that I just not tend to enjoy so much.

So why point out a story I didn't overly like?

Dude, it's a new Ted Chiang.  Even when I don't like it, it's impressive and worth noting.  You don't want to miss new Ted Chiang that is offered online for free.  Besides, what the hell do I know?
Posted by Joe on Saturday, October 09, 2010 3 comments:
Email ThisBlogThis!Share to TwitterShare to FacebookShare to Pinterest
Labels: Ted Chiang

"Closet Monster", written by Leah Bobet is up at Shadow Unit.  Season 3, Episode 5.

I assume you're caught up, so go read.
Posted by Joe on Sunday, October 03, 2010 No comments:
Email ThisBlogThis!Share to TwitterShare to FacebookShare to Pinterest
Labels: Shadow Unit
Newer Posts Older Posts Home
Subscribe to: Posts (Atom)
I also blog at Nerds of a Feather
Follow @joesherry