A Crown of Swords, by Robert Jordan 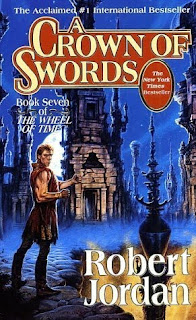 A Crown of Swords
Robert Jordan
1996

A Crown of Swords is the seventh volume in The Wheel of Time and it opens with the fallout of the Battle of Dumai’s Wells from the conclusion to Lord of Chaos. Dumai’s Wells was the rescue of Rand from Elaida’s Aes Sedai and the first time readers really get to see the Asha’man in action and what using the One Power against humans in battle can do. Rather than strike back against the Aes Sedai, Rand keeps his eye on the ball (sort of) and continues his plan to take out Sammael in Illian. But, because of the his kidnapping and subsequent torture, Rand believes he must now be “hard”, harder than ever before. To counteract this, Robert Jordan introduces the character of Cadsuane, a Green Ajah Aes Sedai who is the oldest living Aes Sedai and is a legend in her own time. Cadsuane attaches herself to Rand, despite his rude ill temper and distrust, in an attempt to teach Rand to be soft again, believing that there is no way he can get to the Last Battle and win if he is so hard that he cuts himself off from anyone.

As I understand it, Cadsuane has been a controversial addition to the cast of characters and generally not a welcome one (she’s yet another self-important Aes Sedai who doesn’t explain anything. She’s like Moiraine Squared, only without the chance to see the personal perspective of Moiraine), but I have generally found Cadsuane to be an interesting character and a solid addition. Given the spread out nature of the Aes Sedai, it shouldn’t come as a surprise that there are some out in the world doing their work that we never see, and that they come out of the woodwork when it is clear the Dragon has been Reborn and the world is heading towards Tarmon Gaidon. Cadsuane works for me.

Meanwhile (because with Robert Jordan there are always a couple of meanwhiles going on), Egwene is the Amyrlin Seat of the rebel Aes Sedai in Salidar and with the help of Suian Sanche (the Stilled former Amyrlin), is trying to build her own power base and not be a puppet, while also trying to direct the rebels to move against the White Tower and truly united the Aes Sedai. Egwene

Elayne, Mat, and Nynaeve search the city of Ebou Dar for the fabled Bowl of Winds, a ter’angreal able to control the weather (and potentially undo the touch of the Dark One on the world’s weather). Mat is involved in a strange sexual relationship with Queen Tylin (strange in that it is presented as undesired on Mat’s part, but even though we get Mat’s viewpoint there is still question that Mat really doesn’t want it…which may well be Robert Jordan’s commentary on gender imbalances and can you “force” a man? Am I reading too much into this?). The most interesting aspect about the search for the Bowl of Winds is the discovery of The Kin in Ebou Dar. The Kin are cast-offs and runaways from the White Tower, a secret society that gathers and protects women who can channel and could not make in the Tower or were too old to learn or all sorts of possible reasons. Now, there is much more to the Kin and two somethings about them that makes this a very important discovery, but I won’t get into that because it would be a spoiler (in case one hasn’t read the book / series and is still choosing to read a review of the seventh volume)

There is plenty to like in A Crown of Swords, and there are several memorable scenes (the one with Mat and the gholam in the hallway / staircase is excellent). There are good action sequences, nice political intrigue (though Rand is beginning to be a major pain in the ass as a character), and there were some important developments (the kin, the revelation of the True Power, the Bowl of Winds, some other stuff), but this continues the trend begun with Lord of Chaos where Robert Jordan is very much slowing down the plot. There is less travelling and it feels like fewer days pass. There is more conversation with people sitting (or standing) around. There is plotting, but less action. There are plans for the future that do not develop. Jordan’s pacing slows down compared to the earlier volumes.

In the end, this is still a volume that satisfies. Looking back at the series, though, it is easy to see where Robert Jordan began to test the patience of his audience. With the major characters all spread out so much and all doing their own things, the novels expanded laterally and with less forward movement. Even so, Robert Jordan looms large in my fantasy reading in high school and college and even when the entire novel doesn’t deliver the goods, there are enough outstanding parts to each book that the memory remains untainted. This is big and epic fantasy. While a tight six volume series would have been the new standard for fantasy, you can do far worse than Robert Jordan and The Wheel of Time.


ps: I killed Asmodean. I'm also the Half-Blood Prince.
Posted by Joe on Tuesday, August 04, 2009
Email ThisBlogThis!Share to TwitterShare to FacebookShare to Pinterest
Labels: Robert Jordan, The Wheel of Time

Crown of Swords is interesting to me because on my initial read I thought it was significantly worse than the rest of the series. It was also the first book in the WoT I had to wait for (the first six were already published when I started the series).

Then, a few years later, I did a back to back re-read of the series and CoS ended up being one of my favorites.

I'm now embarking on my third read of the series and I'm interested to see where it stacks up this time.

I wonder if reading the series after it's already published makes the "slow" books easier to handle because you wouldn't have to wait years inbetween titles.
Personally, I liked CoS (well, except for the cover art). It's not one of may favourites, but it's not at the bottom of the list either. You're right about the memorable scenes. Mat's clashes with the gholam probably top the list, but the Shadar Logoth part is good too.
Path of Daggers, on the other hand...

Errant: I think you're right about the slow books being easier to handle, but I do remember that back when I was first reading the series I devoured every book - and even Crossroads of Twilight was still a chance to visit these friends. Despite my disgust with it...

Ha! Disgust...
I also devoured Crossroads when it came out. I wasn't too thrilled, but I don't think it was until I re-read it a year or so later that I realized... nothing significant happens in the book. I guess I was more of a fanboy on the first go, and more of a critic on the second.