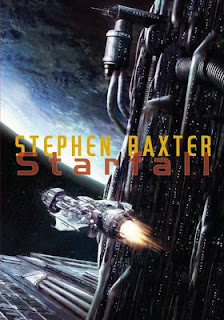 
Beginning with an interstellar war as distant colonial star systems intend to wage war back on the home Sol System for their independence, Starfall is a tense and exciting novella. It is a story which spans decades, from the first wave sent out to attack Earth to the battle itself, and the aftershocks of the war. The details about the background of this future galaxy is fascinating and begs further exploration. For all that this is a novella of fewer than 100 pages and not a 800 page gargantuan Hamilton-esque novel, Starfall is a story rich with detail and history. Starfall is as fully realized as any longer novel, it’s just all compressed into a smaller package. There’s technology, wormholes, sentient computer viruses, interstellar war, scientific future history, time travel, and it’s all told in a smooth, but fast paced manner.

I want more of it.
Posted by Joe on Tuesday, August 25, 2009
Email ThisBlogThis!Share to TwitterShare to FacebookShare to Pinterest
Labels: Starfall, Stephen Baxter