Prime Codex is the debut collection from the new small press publisher: Paper Golem. Subtitled "The Hungry Edge of Speculative Fiction", Prime Codex features newer and upcoming authors from the Codex Writer's Group. Some of the authors collected in Prime Codex include: Tobias Buckell, Cat Rambo, Elaine Isaak, Mary Robinette Kowal, and others. I focus on these four authors simply because these are names that make my head turn and take notice (i.e. I have at least heard of these authors).

Prime Codex begins with an introduction by Luc Reid, the founder of Codex. He explains how it came about and the unique nature of this collection: the authors are all part of the same writer's critique group and so have had access to critique each other's work, including the work found in this collection. This means that the stories are all influenced, in a sense, by each other because of the collaborative nature of the critique group. To what extent this influences extends to the content of the stories...well, that is up to interpretation or theory. 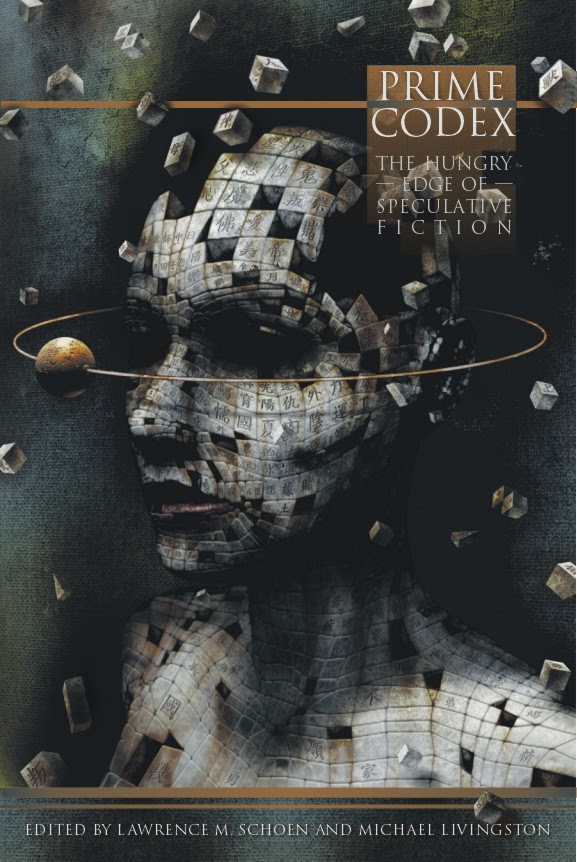 We'll start with the stories which were either not memorable or just did not work for whatever reason. Unfortunately this includes the opening story To the East, a Bright Star by James Maxey. It is an end of days type story, but focused on a limited scale to a character who is waiting for the world to end (a star crashing on the Earth). It is a well written story, but it does not quite work for me. I don't care about Tony or the soon to be end of the world. The next story which fails to excite is The Disenchantment of Kivron Ox-Master, by Elaine Isaak. The story improves as it progresses and it ends well, but even talking animals and a magician who can't undo his magic just doesn't grab a hold of the reader. Jim C. Hines' story Sister of the Hedge was dull. I had to force myself to keep going. Two other unmemorable stories are Ruth Nestvold's Rainmaker and Tobias Buckell's Tides.

That's what did not work. What did work for me is nearly every other story in this anthology. Ticktock Girl by Cat Rambo, the second story in the collection, made me sit up and take notice and wonder what else was in the collection if this story was included. Rampion by Mary Robinette Kowal was a very short, but mournful story and is an exquisite short work (very short work). Salt of Judas, by Eric James Stone, is a work which examines desire and treachery and magic and painting and lust and deception and it's a rather good story.

Also worth noting is Urban Renewal, by Tom Pendergrass. Written as a series of memos to the mayor's assistant, Urban Renewal is the results of an attempt to get rid of the Old Woman Who Lived in a Shoe and the failure of that attempt. A pleasure to read.

The crowning story is the last story: Radical Acceptance by David W. Goldman. This story features alien / human contact, otters, science fiction (no, I mean science fiction discussion within a science fiction story), humor, television, and clever writing. This is the sort of story which readers should enjoy.

Overall, my impression of Prime Codex is far more positive than negative. As in any collection there are stories which fail to resonate, but Prime Codex had far more stories which worked than those which did not. As an anthology which will serve more as an introduction to some newer authors (mostly), Prime Codex serves its purpose well. It is a showcase of the Codex Writer's Group and there is quality coming out of Codex. This is an exciting collection from up and coming authors. It is one worth checking out for fans of SFF short fiction.

One final thing worth noting: All of these stories have been previously published elsewhere (Asimov's, Intergalactic Medicine Show, Analog, Realms of Fantasy, etc), but I imagine most of these will be new discoveries even for the savvy short fiction reader.
Posted by Joe on Sunday, June 24, 2007
Email ThisBlogThis!Share to TwitterShare to FacebookShare to Pinterest

Thanks for your kind words! I'm glad you enjoyed "Rampion"

I'm glad you wrote it! :) What I didn't get when reading it was the tie in to the fairy tale (I only picked that up from one of the reviews you linked on your blog)