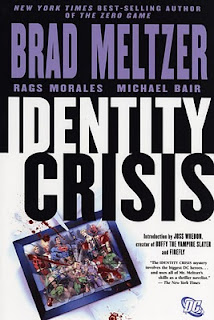 Six months I asked for some comic book recommendations and one that I received was DC’s Infinite Crisis. This is one of a number of “Crisis” events for the DC Universe and because I am an absolute idiot I did not listen to the warnings and I started from the beginning. See, before Infinite Crisis is Identity Crisis, and before that is Crisis on Infinite Earths. I was warned off Crisis on Infinite Earths, but because I prefer to read stuff in order, I gave it a go anyway.

I went back to reading whatever series I was in the middle of at the time and put the DC superheroes to bed for a while. I had just about all I could take from the superheroes. It’s not what I’m interested in reading.

Six months pass and I’m thinking I want to revisit the recommendation. After all, I was warned and I disregarded the warning. I talked it over and we figured out that Identity Crisis was published first, before Infinite Crisis, and I should check that out.

I went in with a certain amount of skepticism. Still not a fan of the capes. Identity Crisis is loaded with characters in full costume.

It begins with the murder of Sue Dibny, the wife of The Elongated Man and the rest of the seven issues follows the Justice League of America’s B-Cast as they attempt to find her murderer, and protect their families. A good portion of the story is told from the perspective of the Green Arrow.

The first issue had a strong emotional aspect to it (most of them do), and I responded to that while still not being comfortable with all of the costumes. The writing was strong, but I had to work out just how much I cared about the characters.

In the end I was very impressed by the storytelling. Identity Crisis is not a story of superheroes, but about the people behind the masks. It is about their personal lives and protecting family and friends. This is a rough story with murder and rape and revelations of dark deeds done by the heroes.

One thing I really appreciated was the deft handling of the legendary characters: Superman, Batman, and Wonder Woman. The characters are all there, but they’re not front and center (or ignored entirely). They are the leaders of the team but are also only called in when the heavy hitters are required.

What was most interesting, though, was the dynamic of Superman and Batman. There is a definite Mom and Dad vibe to these characters. Superman is the Mom of the team. Batman is the Dad. Superman’s the one who is firm, strong, and protective. You go to Mom first. Batman, on the other hand, is the “Don’t Tell Dad” version of Dad. The characters all seem somewhat afraid of Batman. They don’t want Bruce to get involved. There’s a sense that nobody is sure what Batman will do, and you sure as hell don’t want to get on Batman’s bad side.

I was skeptical of reading Infinite Crisis, but now after Identity Crisis I feel better about it. I have a certain expectation of quality now that I didn’t before.

Still not a fan of superheroes, though.
Posted by Joe on Thursday, January 14, 2010
Email ThisBlogThis!Share to TwitterShare to FacebookShare to Pinterest

thanks for the honesty. I feel better with my own squeamishness about the caped ones.

Have you looked at Bill Willingham's Fables Series?
there is not a superhero/heroine in underpants in sight...very imaginative.

Sure have. That what was one of the first comics I read when I started reading.