The Dazzle of Day, by Molly Gloss

It’s very well written and very absorbing. It isn’t a cheerful story though—thematically it’s about worlds and boundaries, and it’s about those things very much on a human scale. This very much isn’t a fantasy of political agency, one of the things it faces is the knowledge that change can be frightening, that responsibility can, but that the answer to that is not refusing to change or refusing to accept responsibility. I sometimes read something and think “I’d have loved this when I was eleven.” I’d have hated The Dazzle of Day when I was eleven, it’s all about grown-ups, it has a lot of older women as significant characters, and while being on the generation starship is essential to everything, everything that’s important is internal. But I love it now for those very things. If there’s an opposite of a YA book, this is it.

The above quote is from Jo Walton's Tor.com review / article on The Dazzle of Day, by Molly Gloss.

I've been following Walton's Tor.com posts for a while and she's turned me on to a fair number of books (Steven Brust and C. J. Cherryh foremost among them) and after reading this post, I was intrigued. I tend to be when Walton writes about books.

What struck me was Walton saying that she would have hated the novel as an eleven year old, and after reading, I agree. I would have also hated it at fifteen, eighteen, and maybe twenty two 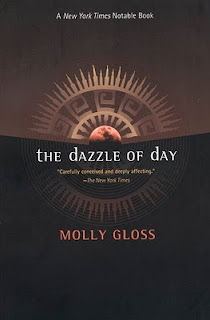 At thirty I think it is a beautiful book.

I've not read many novels set on a colony ship. Most (that I've read) skip over the travel and have the colonists wake up at the new world. But, I've read Paul Chafe's novel Genesis, which has a significant section of the novel in transit. There are differences, of course, between the two novels. The Dazzle of Day is good book, to start, and Genesis is not. But, Chafe's novel was still more about physical and cultural conflict. Molly Gloss is writing about the quiet lives of thoughtful people.

This is a quiet novel. I may not rush out and insist that everyone read this, but when I put it down I sat quietly for a while, decided it was good, and my thoughts have come back to the story from time to time over the past week. To particular characters and to the opening diary entry of a woman who was to leave Earth for the first time. Like the characters, this is a deliberate novel. The Dazzle of Day may not be great, but it is definitely good.
Posted by Joe on Tuesday, January 19, 2010
Email ThisBlogThis!Share to TwitterShare to FacebookShare to Pinterest
Labels: Molly Gloss