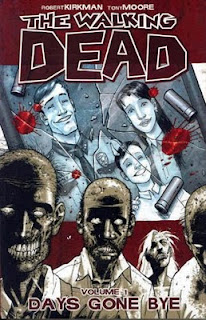 In my quest to find a great new comic series to read I’ve been working my way through Paul Cornell’s list of Hugo eligible comics. I’m not going to link it right now for fear of the man thinking that I’m stalking him. Seriously, I’ve got the most recent four links to that entry and it’s just going to get worse because Cornell’s list is such a great reference. Here, I’ll link to myself linking to it.

Moving on. I’m going to spoil a couple of major story points of the first volume of The Walking Dead, so if you want to go in pure, just stop here and assume that I recommend the comic. Otherwise, while I’m spoiling a point or two, it’s nothing you wouldn’t figure out right away or just flat out assume. This is a zombie story – things aren’t going to go well. It’s the nature of the beast.

From the large stack of comic collections I borrowed from my wonderful local library was the first volume of Robert Kirkman’s The Walking Dead. This is an ongoing series set after a zombie apocalypse and focused (at least initially) around a small group of survivors. I think the story begins a month or two after the beginning of the outbreak. The characters don’t know just how widespread the outbreak is, only that Atlanta is completely overrun. They hope that “soon” the government will return and restore order and rescue them. Except, this hasn’t happened yet and there is no communication with the rest of the world. I kind of have to wonder about radio since that’s the sort of thing that would be likely to keep running for a time after zombie-pocalypse, but you never know.

The first volume centers around a guy named Rick. Rick was a small town Kentucky Sheriff’s deputy who was wounded in the line of duty and ended up in a coma. He woke up in the hospital to find there were no doctors there, and, well, zombies. After doing some fairly level-headed stuff for a man who just woke up from a coma to find his town overrun by zombies, Rick stocks up and heads to Atlanta on the assumption that’s where his wife and child would have gone. The story starts out with Rick as a grounded and solid man, but Robert Kirkman promises in the introduction that over the course of the series we’re going to see some major changes. Kirkman states that his plan is to treat The Walking Dead as a character study of what he believes would be realistic human response in survivors of a zombie outbreak.

What I know from the first collection, Days Gone Bye, is that Kirkman is off to a fantastic start and that there are another ten collections to read. This is exactly what I was looking for – an excellent and long-running series that I could get behind.

Tony Moore's art is done in black and white and perfectly fits the story. I kind of expect a certain amount of art shift to match the changing mood / atmosphere of the series, but if not, it should still be appropriate for the whole thing.

I assume the quality will hold, but so far, this is good, folks.
Posted by Joe on Tuesday, January 12, 2010
Email ThisBlogThis!Share to TwitterShare to FacebookShare to Pinterest
Labels: Robert Kirkman, Tony Moore