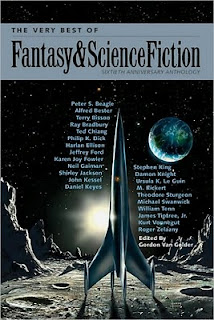 
The Magazine of Fantasy & Science Fiction is generally acknowledged as one of the Big Three of SFF magazines published today. Along with Asimov’s, F&SF annually accumulates a significant number of the genre’s most prestigious award nominations. Stephen King is on record saying that the magazine is “still the gold standard for short fiction in America”. This is all to say that an anthology titled “The Very Best of” this well regarded magazine has some inherently high expectations to meet. By definition, the bar is set very high.

This Sixtieth Anniversary anthology truly spans the decades, leading off with 1951’s “Of Time and Third Avenue”, by Alfred Bester and closing with Ted Chiang’s 2008 novella “The Merchant and the Alchemist’s Gate”. This anthology is packed full of the legends of the genre: Ray Bradbury, Philip K. Dick, Harlan Ellison, Damon Knight, Shirley Jackson, Ursula K. Le Guin, Roger Zelazny, Kurt Vonnegut, and James Tiptree Jr. Van Gelder has also included a healthy selection of modern masters, including Jeffrey Ford, Neil Gaiman, Ted Chiang, M. Rickert, and Peter S. Beagle. Without knowing anything about what stories are included, the names on the cover should be enough to inspire people to pick up a copy. These are the masters of science fiction and fantasy.

Gordon Van Gelder has included two truly legendary stories in this anthology: “Flowers for Algernon”, by Daniel Keyes, and Kurt Vonnegut’s “Harrison Bergeron”. There is an excellent chance that many readers first encountered these stories in their school textbooks (really) and they hold up both as classics of the genre as well as simply excellent stories. While these two stories are perhaps the most notable stories included in this anthology, there are other fine gems to be found.

"The Women Men Don't See" from James Tiptree, Jr is a standout, as is Ursula K. Le Guin's "Solitude". Shirley Jackson is perhaps most famous for her story "The Lottery" (not in this anthology), but her story "One Ordinary Day, with Peanuts" is excellent.

This anthology represents both a cross-section of the history of science fiction and fantasy stories and an overview of the stylistic changes the genre has undergone. The earliest stories collected here represent a kind of “classic” science fiction story. Mr. Van Gelder mentions in his introduction to “I See You” that he could have saved himself a fair amount of time over the years if he simply wrote on rejection letters that "Damon Knight used this same idea better and more succinctly years ago." The later stories reflect a more magic-realist type of story. The genre element is often inherent in the story, rather than being the hook of the story. Now, that is a very gross generalization and counter-examples can be given on both sides of the divide, but it serves to demonstrate a stylistic shift in the sort of story published today compared to fifty or sixty years ago. This anthology represents that shift and the change in style and tone is noticeable.

What is rather curious, though, is what is only evident if readers look through the bibliography pages. While nearly sixty years of fiction is included in this volume, Mr. Van Gelder declined to include any stories published in the 1980’s. Now, there is no reason Van Gelder should be required to include stories published in a given year or a given decade, but it is curious. Was the 80’s a weak decade for F&SF? Was it an oversight? Were those stories previously included in the Fiftieth Anniversary anthology and Mr. Van Gelder did not wish to duplicate the many previous anthologies F&SF has put out? Does it matter?

There is also the curious practice where Gordon Van Gelder would mention in story introductions that he could have included better known stories from a particular author and he included the Zelazny story "partly because I think it's overlooked too often and partly because this story left a huge impression on me when I was thirteen." Not necessarily because he thought it was best.

Readers more familiar with the history of F&SF can identify which stories may have been neglected and merited inclusion. Readers less familiar with that history can only judge what is included here.

If a reader was to only consider the best of the best stories included here, this anthology could easily be considered one of the best retrospective anthologies to ever hit the marketplace. When taken as a whole anthology, however, the reader is left to settle for a very good anthology that was likely three or four stories away from being great. The Very Best of Fantasy & Science Fiction: Sixtieth Anniversary Anthology does represent the best writers of the last sixty years, but with the exceptions of some true standouts, there is some question that it represents the best work those writers contributed to F&SF. Not to mention the missing decade.

Included in The Very Best of Fantasy & Science Fiction: Sixtieth Anniversary Anthology are some very good stories which likely rank among the best published in this magazine. They just may not be “The Very Best” of the best which the title indicates.

Is this anthology worth picking up? Oh, absolutely. There is some fine, fine fiction here.

I have an odd relationship with this magazine. I had a subscription in past years and have since cancelled it. F&SC consistently published what I felt was amazing fiction of no interest to me. Being as it is so well regarded I always wondered if there was something wrong with me as a reader. Perhaps my taste in fiction were, and still are, skewed.

Having said that Van Gelder hasn't been the editor for sixty years, but he is still the guy choosing the stories. I've been curious about this book since it came out but I think it remains a library check out for me.

Even though I'm always hard pressed to not buy anything with Michael Swanwick's name on the cover...

Definitely worth a library check.

I'm mixed on my opinion of F&SF's output. I read an issue a couple years back and I sort of liked it, but not to the point I'd pay for it. The award nominated stuff is alright, but it's not enough to get me into the magazine.

I've got the same relationship with Asimov's - and I did subscribe. I almost like enough of Asimov's fiction to make it worthwhile to resubscribe, but not quite.

Do check out the Asimov's 30th Anniversary Anthology. THAT is excellent.

Weird Tales is worth a subscription. I haven't resubscribed, but I really, really need to.

I love reading anything with fantasy and science fiction, especially if it has to do with magic, wizards, or dragons. I recently published part one of a fantasy trilogy some might find interesting; The Magic of Fuller, "Keeper of the Stone". Feel free to contact me with any feedback.http://www.strategicpublishinggroup.com/title/TheMagicofFullerBookOne-KeeperoftheStone.html