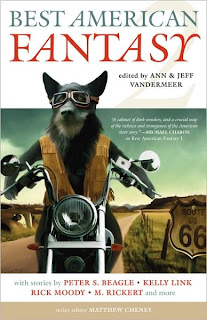 In the introduction to the first Best American Fantasy anthology, editors Ann and Jeff VanderMeer attempted to define in very broad strokes what they meant by “Best”, “American”, and “Fantasy” and used a very broad definition of what constituted a fantasy story. This second volume is intentionally tighter in the definition of fantasy, here “the manifestation of fantasy is real within the story, even if only hinted at in some” (pg 12).

There are some absolutely fantastic stories in this anthology, in both meanings of the word “fantastic”. This would normally be where a disclosure of what the standout stories in Best American Fantasy 2 are, but all of the stories more than have merit. There are very few questionable stories here, all are solid, and which story rises above the rest will likely depend on personal taste. My standout stories are written by Kage Baker, Michelle Richmond, Peter Beagle, and Rachel Swirsky.

“How the World Became Quiet: A Post-Human Creation Myth” from Rachel Swirsky is a powerful closing story. Originally published in Electric Velocipede #13, “How the World Became Quiet” is a future history of mankind after numerous apocalypses. This future history is completely unexpected and the shape of humanity is nothing like readers will expect. This is a spectacular story from one of the best new writers today.

The closing story is a far future science fiction tale, but “The Ruby Incomparable” from Kage Baker is a more traditional fantasy. Baker works with magic, gods, and a desire for immense power. This could be just any other story, but in the hands of Kage Baker, the result is nothing less than magical. Pardon the cliché.

The range of fiction in Best American Fantasy 2 is impressive, but perhaps no story demonstrates just how varied the fiction here can be is Matt Bell’s “Mario’s Three Lives”. This story harkens back to the childhood of every reader within a couple of years of thirty who played Nintendo in their childhood. Yes, it’s that Mario. This rather short story is far more moving than one would think and it perfectly encapsulates what the “Best American Fantasy” really means.

The editors VanderMeer have put together an anthology with a distinctive voice and which lives up to the billing of truly containing some of the best American fantasy published in 2007, though the stories here know no year. Best American Fantasy 2 is should be considered a “must read” anthology. Period.

I'm hesitant with this one. A tighter definition of fantasy, “even if only hinted at in some” stories confuses me. I'm all for subtlety but some of the literary fantasy, with only minimal fantasy elements don't really resonate with me as a reader.

To add to my confusion, the inclusion of The Ruby Incomparable which I've read elsewhere and loved was decidedly fantasy if not derivative--and I don't say that as a bad thing.

It seems to me that this volume is going to encompass a very large definition of fantasy and not small one.

Do you happen to know if The Ruby Incomparable is a novel except? I seem to remember thinking there was a lot of material left with that one when it was over, but have since forgotten to look further into the matter.

"I'm all for subtlety but some of the literary fantasy, with only minimal fantasy elements don't really resonate with me as a reader."

There is some of that. Outside of The Ruby Incomparable, few of the stories have that overt true secondary world fantasy. Quite a few are set on versions of our world, just with some very strange things (Bruce Holland Rogers tells of a variety of baffling hotels).

It's a fantastic anthology, but you're looking for stories more along the lines of what Kage Baker did, you're not going to find it.

As far as the Baker goes, I think it's standalone. I'm not aware of this being part of anything else. It stands well on its own, but I agree that the world offers hints of bigger things.