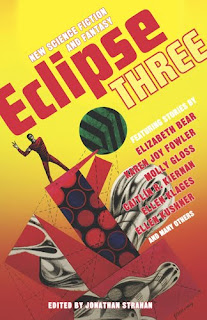 Eclipse Three is, as one might expect, the third volume of Jonathan Strahan’s Eclipse series of anthologies published by Night Shade Books. Eclipse is an anthology series featuring all original fiction and, unlike most other original anthologies on the market, it is unthemed. Stories may leap from fantasy to science fiction to a blending of the two without blinking an eye and without having to fit any set framework. This is more akin to what readers might find in Strahan’s Best Science Fiction and Fantasy of the Year anthologies. Rightly so, as several stories in Eclipse Three are Year’s Best worthy*

Nicola Griffith’s story “It Takes Two” is the absolute highlight of this anthology, but other standouts include: Elizabeth Bear’s “Swell”, "The Pelican Bar" from Karen Joy Fowler, Nnedi Okorafor's "On the Road", and "Useless Things" from Maureen F. McHugh.

Only two stories truly disappointed here. Paul DiFilippo’s “Yes We Have No Bananas” and Molly Gloss's "The Visited Man".

The rest of the stories range from the solid to the specatular.

Despite the subtitle of the Eclipse series, the stories of Eclipse Three are generally not heavy on genre elements. Most of the stories are set in a version of the real world, just with elements of magic or impossible technology. The genre elements are seamless parts of these stories about character, about people. The tech and the magic are never the point.

The stories here are beautiful, heartbreaking, thrilling, moving, and hopeful - each in their own way.

Jonathan Strahan talks about how this particular cover came about, but it is worth pointing out just how awesome the Richard Powers artwork is for Eclipse Three. This is a beautiful volume in person and is quite striking. The artwork would have gone to waste if the stories between the covers were not equally striking, but with very few exceptions, the stories are more than up to the task.


*Strahan has already announced the TOC for the fourth volume of his Year’s Best and two stories from Eclipse Three are included (Griffith and Fowler). Gardner Dozois included the Griffith and the McHugh in his annual anthology.
Posted by Joe on Monday, January 04, 2010
Email ThisBlogThis!Share to TwitterShare to FacebookShare to Pinterest
Labels: Eclipse Three, Jonathan Strahan

I'm delighted you liked the story. I had an absolute blast writing it.

I think I had a similar blast reading it.