The Sparrow, by Mary Doria Russell 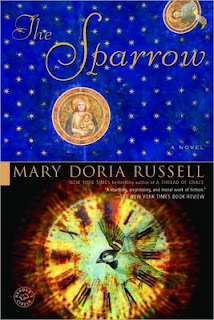 
The thing about The Sparrow is that from the very beginning that the mission is doomed to fail, even before we know what the mission is. Father Emilio Sandoz, Jesuit priest, will be the only survivor of a mission to Rakhat. Before we know who will accompany Father Sandoz, or why, we know they don’t survive. This is, of course, and automatic interest piquer. What happened? What could leave Father Sandoz an utterly broken man?

And what does the title mean? I don’t often wonder about titles, but I wondered about this one.

Mary Doria Russell tells two stories in The Sparrow. What I consider to be the primary story is the aftermath, when Emilio Sandoz has returned to Earth from Rakhat in 2060 and is dealing with what happened. In the Aftermath, the reader is never given the perspective of Father Sandoz. The perspective the reader has, which is a limited third person perspective, is of the other senior Jesuit priests as they gently (mostly) probe Father Sandoz and also try to heal the man from his ordeal. When I called Father Sandoz “an utterly broken man” the description was regarding his emotional state, but Emilio Sandoz was also left without the ability to use his hands. He was physically broken on Rakhat. Throughout the novel the reader gets deeper and deeper into what happened. Early on, though Sandoz is not forthcoming, one set of assumptions can be made regarding what took place on Rakhat. Almost without exception, whatever that first assumption is, it’ll be wrong.

The secondary story is the gathering of the “fellowship”, the discovery of Rakhat, the travel to the planet, and what happens on the ground. I consider this to be the secondary story simply because I found it less interesting than that of the emotionally broken Sandoz. This story introduces all the primary characters of the novel – the ones fated to join Sandoz on the mission to Rakhat and thus ultimately doomed. What we don’t know from the start is how.

One might think that with foreknowledge that everything ends in disaster and scandal and misery that The Sparrow would be a gloomy book. It’s not. Even knowing from the start how Sandoz ends up, so much of The Sparrow feels borderline triumphant and filled with grace. The continual switching of time from “past” to “present” reminds the reader that any feeling of triumph or grace should be tempered with the understanding of how it all ends, but the feeling persists.

The thing is, The Sparrow is a beautiful and painful story. Perhaps knowing how the mission ends before it begins is part of what makes the doom bearable. The loss and death and failures are still shocking, but not unexpected. How can they be? The beauty and the grace and the pain is in the telling. Russell tells it well.

This brings us back to the title. The Sparrow. Given that the novel prominently features Jesuits, and thus Christianity, the use of the word “sparrow” immediately brings to mind the song “his eye is on the sparrow and I know he is watching me”. It also is an affirmation that God knows everything that occurs, that not even a sparrow falls without God seeing. The real question is whether The Sparrow, the novel, is condemnation or affirmation of that belief. Ultimately it is neither. It depends on perspective, on who is looking and who is judging. It also leads to this passage, late in the novel:

"Matthew ten, verse twenty-nine," Vincenzo Guiliani said quietly. " 'Not one sparrow can fall to the ground without your father knowing it' "

Normally I would not include that quote because it speaks to the ultimate theme of the novel, but it does so after more than 300 pages of discovery and revelation. I include the quote because if we think about it, we know the sparrow falls from the beginning of the novel. The mission to Rakhat is doomed with only one survivor, a Jesuit priest now disgraced in the public eye because of the nature of his fall. The sparrow still falls.

But oh, what a fall.
Posted by Joe on Wednesday, February 11, 2009
Email ThisBlogThis!Share to TwitterShare to FacebookShare to Pinterest
Labels: Mary Doria Russell, The Sparrow

I read this about a year after it published and was very impressed. I thought it was a very powerful novel.

Great review of a fantastic book. This book is very moving and completely unpredictable. It's one of the few books that kept me thinking weeks after reading it.

Have you read Children of God? I've shied away from it for fear of the sequel let-down.

I haven't. I just finished The Sparrow earlier this week and haven't had the chance. It'll probably be a few months, and I know the elevator pitch would be "Sandoz returns to Rakhat". If MDR is at all honest to Sandoz's character I think a return trip could be exceptionally compelling. I want to see what she does with the return trip.

Though...to be honest myself...I rather like the idea of Sandoz living out his days quietly healing back on Earth. Except at some point Sandoz might stop being quiet because he will need to be useful and working in the Jesuit laundry won't be enough for him.

He definitely goes back, though how he could bring himself to do it is beyond me! Emilio is a character I came to really care about. His ordeal is an emotionally draining read. There is a sense of dread that builds as the book goes on that even knowing the outcome in advance can't quell.

This excerpt for Children is very good but I'm not sure how much more MDR can put him through. I'm with you. I'd rather the poor man live out his life in peace but that does not seem to be his fate.

I'll read it, but I'll put a few more books in between before i tackle it.

I too have been shying away from Children of God for fear it wouldn't live up to The Sparrow. I may try it someday, though.

The funny thing as I read your review, Joe, is that I found myself reading lightly to try to avoid spoilers, even though I've already read the book!

The Children of God is good, but it does not at all live up to The Sparrow, which has been one of my favorite novels since I read it in 2000. It's a quality book, because Mary Doria Russell is an excellent story teller, but it doesn't hold a candle to the Sparrow.

The Sparrow is one of the most captivating and engaging novels I've ever read.