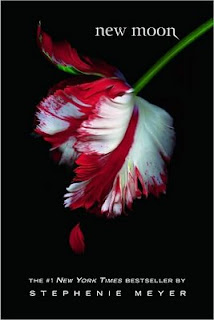 What in the world am I doing writing a review of New Moon when I disliked Twilight as much as I did? Like the aftermath of a car accident, I felt compelled to slow down and gawk. It isn’t because I think that I would enjoy what I saw, but rather because I simply could not look away.

New Moon opens with a few chapters of Edward and Bella before something happens and Edward elects to leave Falls never to return, telling Bella that he doesn't love her and it will be as if he never existed. This throws Bella into a major funk until she re-strikes up her friendship with Jacob.

The real point of New Moon seems to be an excuse to expand Jacob Black as a character and as a potential love interest for Bella Swan, our almost plucky heroine. New Moon, like Twilight, is still told from the third person perspective of Bella, but gives Jacob a much larger role than he had in Twilight. Astute readers will remember a brief story Jacob told early in Twilight regarding the members of his reservation, lycanthropes, and their hatred of the “cold ones”. The “cold ones” are the vampires, and the reader was left to suspect that Jacob and his tribe at La Push are werewolves. New Moon answers any question that may have been lingering and yes, Jacob is a werewolf. Like the vampire legends, the truth about werewolves is not the same as the lore. Happily, no werewolves sparkle in the sunlight. I’m not sure if I had the stomach for that.

Given my stated position about Twilight and the Bella / Edward relationship I was told that I would like New Moon much, much more than I did Twilight. I would become a member of Team Jacob because he treats Bella better and lets her do anything she wants.

The truth is I was initially irritated by the fact that Bella was 18 and Jacob 16 if I was intended to take seriously any potential romantic relationship between the two. Such a relationship is possible, but unlikely. A senior girl and a sophomore boy? Not likely. Stephanie Meyer makes a point to show just how much Bella enjoys Jacob’s company (I buy this) and that he acts with more maturity than his age (I’ll grant this). Bella and Jacob play a game which they come up with their “real” ages based on how they act and what they can do, and Jacob is said to be “older” than Bella. I can see the game, and Bella acting with less emotional maturity than her actual age (despite being capable of otherwise taking care of her father), but the entire time the burgeoning relationship was a stretch.

The other reason for the stretch was that Stephanie Meyer seemed to be playing a heavy-handed allusion to Shakespeare’s Romeo and Juliet. Edward and Bella talk about the play early on. Later Bella thinks repeatedly about the play, and at one point flatly places herself as Juliet, Jacob as Paris, and Edward as Romeo. This is not subtle. This is a very large hammer.

Oh, and while I'm thinking about it, let's get back to my moral issue of the Edward / Bella almost-abusive relationship. Now, Jacob can be considered a good boy up until he becomes a werewolf (puberty?). After which, the big concern about the werewolves is that once they get mad they will get uncontrollably violent. Hence Emily Young's disfigured face. So, the implication is - and this is the fear of the vampires regarding werewolves - that if Jacob gets mad HE will hurt Bella in the future. So, the otherwise normal and potentially healthy relationship Bella has a chance at? Yeah, that one too is a potential abusive relationship for Bella. Girl can't catch a break and the story answer to this would be "but he can't help it that she makes him mad."

I've got a seriously unhealthy level of disgust for the portrayal of Bella Swan and both of her potential relationships in this series.

The major issue I have, is that New Moon is simply not a very good book (despite wasting all these words on it). There are no glaringly offensive passages such as the "incandescently sculpted chest" from Twilight, though Edward's late declaration of love is borderline hideous. It's just...not...good. The R&J hammer just drives the nail through the heart of the book. The borderline-suicide fantasies of Edward and Bella...ugh.
Posted by Joe on Friday, February 13, 2009
Email ThisBlogThis!Share to TwitterShare to FacebookShare to Pinterest
Labels: New Moon, Stephanie Meyer, Twilight

Could not look away. I hate when that happens. That's the reason why I slogged all the way through The Secret History and The Bonfire of the Vanities.

After finishing both, I wished I could have looked away.