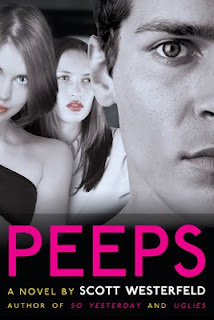 Scott Westerfeld is probably best known for his four volume YA Uglies series, but he has also written a handful of other YA novels. I figured the man who could do such a great job with Uglies could be trusted with a vampire novel. After all, it had to be better than Twilight. This brings me to Peeps.

When we meet Cal he has been hunting his ex-girlfriend Sarah. Sarah is infected with some disease, some parasite, something that makes Cal label her a “peep”. Westerfeld takes a bit of time getting to it, but Sarah, and other peeps, are vampires. Only it’s not exactly what vampire lore tells us. I won’t get into the mechanics of what Westerfeld’s vampirism is, except to say that Scott Westerfeld is both true to the history of vampire legends as well as true to what could be a semi-plausible science. I’ll get back to that in a moment.

Most peeps (parasite positive) become semi-mindless animals, existing only to hunt, kill, and infect more humans. Most peeps. Some peeps, like Cal, get all the benefits of the parasite (increased strength, vision, reflexes, longer lives, etc) with few of the drawbacks. In fact, the only real drawback is that Cal is contagious. This limits the social / romantic possibilities for a normal 19 year old male who would infect with just a kiss. Regardless, those peeps who are otherwise human are recruited into the Night Watch to hunt down the nasty peeps. Cal hunts Sarah (whom Cal infected), and later Morgan (who infected Cal). By doing so Cal discovers more secrets about what being a peep means and the larger (under)world of peeps.

Westerfeld could tell the story straight and probably have an interesting novel. Rather than telling the story straight Westerfeld instead alternates Cal’s chapters with brief chapters discussing a variety of real world parasistes in gory (yet entertaining) detail . This accomplishes two things. First, it grounds Peeps into a more realistic setting where there are parasites already infect humans (and everything else). In this world, our world, the evolution of a parasite that might do something like the peep parasite doesn’t seem so extraordinary. After all, what might this parasite be but a variety of rabies? Or something else that humanity has experienced in real life. Second, the parasite chapters tells a dual story in Peeps, building to a conclusion that in entirely intertwined with that of Cal.

Scott Westerfeld is slick that way.

While not quite as instantly and deeply engaging as the Uglies series, Peeps is still the compelling and easy reading story one should expect form Scott Westerfeld. He builds tension and interest in his narrative with each passing chapter and each small reveal as he slowly tears the canvass wide open and shows the larger story hiding underneath.

Peeps is a vampire novel, but it really doesn’t have to be. It’s a novel about a young man trying to hunt down and capture (not kill) people infected with a virus that the public can’t know about. It’s also a vampire novel, but not in any sort of cliché manner. It’s well done and worth a look. I suspect everything from Scott Westerfeld is worth a look. I’ve read five of his novels so far and each has been quite good.
Posted by Joe on Wednesday, February 04, 2009
Email ThisBlogThis!Share to TwitterShare to FacebookShare to Pinterest
Labels: Peeps, Scott Westerfeld

Glad to know you liked this book almost as much as I did.

I haven't read Peeps, and was more engaged by the ideas in Uglies than the book itself. Sounds like I should try Peeps.

And for adults, The Risen Empire is just unbelievable hard SF. There are times when I thought his descriptions of future technology and its effects reached the level of poetry in their clarity and strangeness.

Peeps is worth a look. I'm interested to see what Westerfeld does with the follow up The Last Days.

I liked the alternating of the chapters between Cal telling his story and him telling the reader about different parasites, whose traits were key parts of the next chapter. Read my full review at http://bourg.info/2012/05/20/peeps-by-scott-westerfeld/