The Shadow Rising, by Robert Jordan 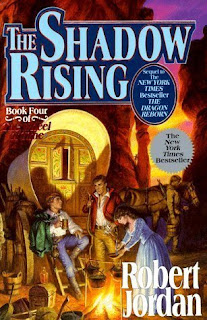 The Shadow Rising deals with the fallout of Rand taking Tear. The novel opens with stagnation, with Rand refusing to act (much to Moiraine’s frustration), but after a couple hundred pages (really) Robert Jordan begins to move the action. Perrin returns to the Two Rivers to protect his home and his people. Rand travels with the Aiel to Rhuidian, though he may not know exactly why. Mat, too. Moiraine and Egwene follow, Egwene to study with the Aiel Wise Women to learn more of being a Dreamwalker.

I can grant the argument some readers may make about the opening stagnation, but even there Jordan lays out some fascinating stuff. Weird things occur to Rand, Mat, and Perrin. They are each randomly attacked – Rand by his reflection, Perrin by his axe, and Mat by playing cards. Jordan pulls it off, though when written down in a single sentence it may not sound very thrilling or dangerous, but this is evil tainted and well done. Lanfear makes another appearance, telling Rand that he will need to learn to control saidin or the other Forsaken may destroy him…and that Rand needs a teacher, a male Forsaken to teach him. Rand and Mat each step through a ter’angreal leading to the world of the aelfinn, weird creatures talking in riddles.

Mat is told that his fate is “to marry the Daughter of the Nine Moons”, “to die and live again, and live once more a part of what was”, “to give up half the light of the world to save the world”. Just in case anyone thought that Mat might NOT be important…yeah, Mat is important.

See, this is part of what I like best about The Shadow Rising. Robert Jordan doles out mystery and history throughout the novel and more than his skill at storytelling, the weaving of the history and foreshadowing draws me in. If we’ve been paying attention we know already that the Court of the Nine Moons is Seanchan, though it is easy to overlook because we don’t know why those mentions in the previous two books might be important. This is why.

The main reason I am so fond of this book, though, is Rhuidian. When Rand walks through the ter’angreal rings at Rhuidian he gets to live scenes from his ancestry, scenes of the history of the Aiel, who they are and who they were. What they were. Through these sequences we get our second glimpse of the Age of Legends – before, during, and after the Breaking of the World. For me, Rhuidian is worth the price of admission. But, there is more, some of which I thought was in the next book – the uprising in the White Tower, Nynaeve besting Moghedien, Rand fighting Asmodean, Rand discovering how to Travel, Slayer, Lord Perrin, more.

The Shadow Rising is ultimately an uneven book. There are long, long passages with little of note occurring and we may well feel that we’re just waiting for the next major set piece to come up, but at the same time Robert Jordan’s world is an old friend and though this is the fourth book in the series Jordan delivers several major events that continue to build towards something potentially very big. Jordan has not yet hit the wall, and while The Shadow Rising is a bit slower than I remembered, there was also more goodness than I remembered.


Nynaeve Braid Tug Count
The Eye of the World: 0
The Great Hunt: 0
The Dragon Reborn: 8
The Shadow Rising: 1

Okay, giving The Shadow Rising a braid-tug count of 1 is an arguable position but I feel confident about it. There are several moments throughout the novel where Nynaeve grabs her braid or holds her braid, but only the one tug that I noticed. Nynaeve “gripped the end in her fist” on page 85 and “gripped her braid hard” on page 90. The braids don’t make another appearance (that I noticed) until page 586 where Elayne observes that Nynaeve “seemed to have given up trying to pull at those braids when she was angry.” It is only on page 596 that Nynaeve tugs her braid for the first time in the novel. It is unclear if there are multiple tugs in this passage or just one, so I’m going with a count of 1 for The Shadow Rising. So far the braid tugging doesn’t seem overwhelming, with only 9 total tugs over the 2000+ pages of text.

Previous Reviews
The Eye of the World
The Great Hunt
The Dragon Reborn
Posted by Joe on Monday, February 09, 2009
Email ThisBlogThis!Share to TwitterShare to FacebookShare to Pinterest
Labels: Robert Jordan, The Shadow Rising, The Wheel of Time