The Many Lives of Inez Wick 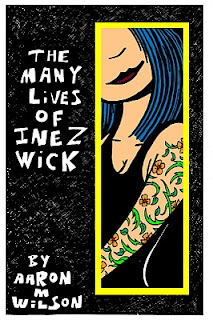 
So why then am I posting about Aaron Wilson’s self published collection of linked stories? I haven’t read them and given my backlog and what’s coming up for me, I’m not sure when I’d even get to it.  This is just signal boosting.

Not sure if anyone remembers this, but Aaron used to run the Soulless Machine Review blog. He focused quite a bit on short fiction and delved a bit into novel length stuff, too. He’s been out of that game for a number of years now, but I did enjoy his blog back in the day. Also, for me, he’s a local writer. He’s Minneapolis based. I’ve interacted with the guy a bit in the past about our blogs and the local scene. He still has a blog under the Soulless Machine umbrella, but it’s not the same thing.

I also recently read one of his stories (included in this collection) and enjoyed it.

This is preamble to the point that Aaron Wilson has his debut collection making its way out there in the world and I want to get some word out on his behalf. Sometimes you just have to throw some support to a local author and a former fellow book blogger. And hey, his story “Dog Fight” was rather good and it’s part of this collection.


"The Many Lives of Inez Wick" is a collection of short stories that focus on the sometimes eco-heroine, Inez Wick, as she treads the underbelly of domestic terrorism, occasionally blowing up resource exploiters and pouters

When I came on upon this write up via Google Reader, I was like...I know that cover...Wait! That's my cover!

I was unprepared to see such kind words in support of my...yes, self-publishing project.

You made me a little bit weepy, this morning. Thank you!

And isn't Bob's cover art amazing! I made sure to forward your post to him.