In the spring of 2003, a pride of lions escaped from the Baghdad Zoo during an American bombing raid. Lost and confused, hungry but finally free, the four lions roamed the decimated streets of Baghdad in a desperate struggle for their lives. In documenting the plight of the lions, PRIDE OF BAGHDAD raises questions about the true meaning of freedom - can it be given or is it earned only through self-determination and sacrifice?

That is the copy on the back cover of Pride of Baghdad, and any attempt I might have 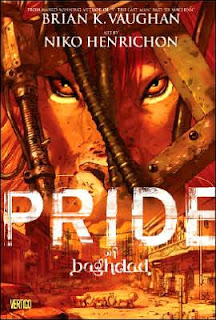 made to describe the premise of this graphic novel would have failed utterly in the face of that short paragraph. So, why try?

The words I would normally use to describe this story would be "heartbreaking", "powerful", "brutal", "beautiful", and perhaps "amazing". All of them would fit. None of them would do Pride of Baghdad justice.

What words would? I honestly don't know. Haunting. Exceptional. Think of a word you might use to praise something and I'm not sure that word is quite right either.

Boiled down, this is a simple story of four lions escaping from a zoo in the midst of the beginning of a war and all the wreckage and damage that implies. The only existence these lions have known for most of their lives is the zoo (though not entirely). They are lions, not men, and despite the fact that they converse, they converse as animals might - though perhaps more eloquently at times. These aren't talking animals in the "fantasy" sense. They're real animals in a war torn city. They question if they are truly free, they hunt for food, they try to survive.

Pride of Baghdad is about freedom and survival. And heartbreak. Perhaps it is more moving because these are lions, proud and strong animals, and not humans. These aren't helpless animals, even coming from a zoo, but what chance do they have in the face of war?

I think that's the story Vaughan is telling here. That any way, this one in particular, has casualties we don't think about and maybe haven't imagined. Here's a face. Here's a damn good story. You get both.

Worse. It's based on a true story of four lions which really did escape the Baghdad zoo.

Damn this is a good book.
Posted by Joe on Friday, June 26, 2009
Email ThisBlogThis!Share to TwitterShare to FacebookShare to Pinterest
Labels: Brian Vaughan, Niko Henrichon, Pride of Baghdad

Hi Joe,
Brilliant review! Sounds like me and the peeps need to hurry up and order a copy!
Bless up and thanks for all the awesome reviews :)
Chilli x

I really wonder what you'll make of We3. It's similarly tragic.

Hahaha I can see if I continue to read all your reviews I going to be spending all my money!! Too many good things offered at once lol
I've put Pride on hold and have just ordered a copy of We3 from Amazon.
Really looking forward to it :p
Chilli x