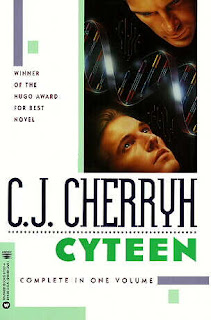 
Who killed Ariane Emory? This isn’t exactly the central question of Cyteen, but it’s the one which perhaps readers of Cyteen would like answered most.

Cyteen is set in C. J. Cherryh’s Alliance / Union Universe, a future expansionist history of humanity in the stars. The opening pages of Cyteen provides a full background of the colonization and political history of that universe and how the various factions got started. It takes all of four pages and is perfectly fascinating on its own. Then Cherryh rolls into the story and introduced Ariane Emory, an aging scientist potentially nearing the end of her life. Emory is a member of the Union governing Council of Nine and the founder of Reseune, the leading science labratories in the universe. Emory is known as a brilliant woman (she is one of very few certified as a Special), though also a difficult woman. The reader is given all of this introduction, which Cherryh quite naturally handled far better than I am right now, and it serves to create a sense of the political and social landscape of Reseune. Cherryh reveals the Reseune plans to clone and recreate Specials so the Special brilliance is not lost when they die. There is one notable previous attempt and failure.

When Ariane Emory is murdered early in the novel there are several major developments put into play. First, another Special at Reseune is implicated – Jordan Warrick. Warrick and Emory had a once close professional (and personal) relationship which strained. Emory, shortly before her murder, began a relationship with Jordan’s son Justin – except the relationship was not an equal one, it was a very dominant one on the part of Emory. The second major development is that the cloning program goes forward – only with a particular change. Because Reseune needed Ariane so badly, they cloned her and attempted to recreate as much of her upbringing as possible in order to bring out the exact genius that was Ariane Emory. It is a long term strategy.

That’s the background and set up of Cyteen. Cyteen spans perhaps fifteen to twenty years and provides two major viewpoints during that time: Justin Warrick and young Ariane Emory (the clone). Justin’s storyline is that of survival, of trying to fit in at Reseune with all of the political drama and upheaval caused by Emory’s death AND by his father’s confession. Note: the reader never sees the murder occur, so what we don’t know is if Jordan Warrick told the truth with his confession. We assume not, but can be wrong. Emory’s storyline is of a young and isolated genius child growing up and figuring out her place and potential power.

Cyteen starts out strong, but the novel only improves at the story progresses and the reader meets Ariane Emory as an incredibly precocious teenager – one who is led, in part, by the writings the older Ariane Emory left for her clone. Cyteen is many things at once – political drama, social commentary, coming of age (for both characters, really), science fiction, a story of morality, and probably a handful of other things I can’t quite work out on the first read.

What it is more than anything is an outstanding novel. Cyteen quite rightly won the 1989 Hugo Award for Best Novel. It is regarded as one of Cherryh’s best novels and after years of avoiding Cherryh’s work (for no particular reason I can articulate), I am completely sold on C. J. Cherryh. From one novel. From this novel.

Cherryh quietly and subtly asks questions about morality in terms of artificially created humans called “azi”. Azi have few rights and are property of Reseune. They are grown / born to do a particular job and are raised to spec and taught by “tape”, a method of deep teaching that programs (in a sense) learning and behavior. Cherryh looks at the responsibilities of those with power over azi and a bit on the morality of such a workforce.

There are references to conflicts and debates in the larger universe, though Cyteen is almost exclusively set at Reseune (with the occasional foray out and into a nearby town).

Cyteen is a big novel that hints at an even larger universe. It is an excellent place to begin one’s reading of C. J. Cherryh, but after you do, I imagine you’ll want to continue. After finishing Cyteen I rushed out and purchased a small (but growing) handful of Cherryh novels. That’s my ultimate recommendation – Cyteen was good enough to make me spend more money.


You'll also want to read Jo Walton's thoughts on Cyteen.
After you've read the book, see this post from Walton as she thinks about who killed Emory.
Posted by Joe on Thursday, June 25, 2009
Email ThisBlogThis!Share to TwitterShare to FacebookShare to Pinterest
Labels: C. J. Cherryh, CJ Cherryh, Cyteen