Kitty and the Dead Man's Hand, by Carrie Vaughn 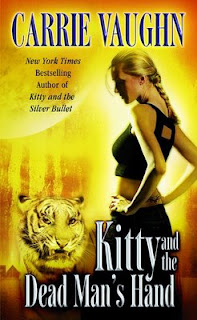 
Kitty and the Dead Man’s Hand opens with Kitty Norville in a good place in her life. For a change. She, along with her boyfriend / fiancé Ben, are the alpha pack-leaders of Denver’s werewolf pack. Kitty runs things differently than her predecessor. She has a good thing going with Ben. Her radio show continues to be a success.

Kitty’s original plan was to eschew the big wedding that her mother might have wanted and just elope to Vegas. This is where the complications begin. The vampire Master of Denver requests that Kitty deliver a letter to the Master of Las Vegas. Kitty’s boss at the radio station comes up with the grand idea of doing a live / televised radio show direct from Vegas. All while she is supposed to get married. To make matters worse there is a gun show in town, in the same hotel Kitty and Ben are staying at. They run into bounty hunters (like Cormac is / was), vampires, a magician who might just do real magic, and a stage show which might just be lycanthropic in nature. Kitty and the Dead Man’s Hand is chock full of fantastical goodness.

Carrie Vaughn is not content to rest on her laurels with this series and just tell the same story over and over. Thus far she continually shakes things up and puts Kitty into situations she can barely handle on her own. That’s the thing about Kitty Norville – she is not a one woman wrecking crew. She struggles and gets in over her head. But, she is loyal to her friends and tries to do the best she can. There are also generally consequences to Kitty’s actions which affect and shape the world around her. Despite her lycanthropic nature Kitty isn't Supergirl. The series in general and Kitty and the Dead Man's Hand is stronger because of it.

What is really important, though, is that Kitty and the Dead Man's Hand is another fast paced novel which keeps the reader interested from the word "go". "Go", in this case, is Kitty looking at wedding dresses. Okay. Yeah. Not normally something that would interest me, but this is Kitty freaking Norville and it isn't like even looking at wedding dresses would possibly go smoothly. That's what I come back for. Things not running smoothly. If our heroine had things easy the reader would have a boring book.

The reader has anything but a boring book. The reader has another solid effort from Carrie Vaughn and in a series which maintains a high standard of excellence while taking risks. The threats here are varied and increase in scope.

Thus far in the series the scope of the danger has been fairly small and personal. There are threats to Kitty, her family, her friends. The stakes are big for Kitty, but would otherwise be considered small. This begins to change in Kitty and the Dead Man’s Hand. Near the end of the novel the stakes are quite dramatically increased as Carry Vaughn introduces something much bigger than anything in the previous four novels. A character asks Kitty if she's read any Lovecraft. It's not a casual question, though it is played off as such at the time.

I suspect the next volume, Kitty Raises Hell, will raise the stakes even farther. If the previous five volumes are any gauge (and they should be), it should be a good one. Kitty and the Dead Man's Hand sure was. It's a book you don't want to put down.

I'll confess it. I'm a fan of this series and of Miss Vaughn's work.