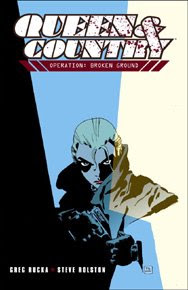 The other day I noticed that graphic novels have taken over my reading habits for the month of April. Seriously. They’re piling up. I figure this is as good of a time as any to acknowledge what I’ve been reading.

Queen & Country, written by Greg Rucka. The short version is that it is about a team of British spies in Operations (not Intelligence). The primary character Queen & Country focuses on is Tara Chance, one of three operatives (codenamed Minders) Each volume covers a different operation. Operation Broken Ground (Volume 1) introduces readers to Tara and the Minders and features Tara assassinating a former Russian General who provides arms to terrorists – and the fallout of that action. The second volume, Operation Morningstar, is a new operation and is recovering documents in Afghanistan before the Taliban can get them.

The interesting thing about Operation Morningstar, pointed out in the introduction, is the threat given to the Taliban and Osama Bin Laden. Tara, in a therapy session, explains why she wanted to be in on this mission – about the human rights / gender rights issues of the Taliban, the danger posed by this government, and Osama Bin Ladin. The issues of Operation Morningstar were published in the wake of 9/11 when this was on everybody’s lips. What the introduction points out is that these issues were written Summer 2001, before the attacks. Extremely good work by Greg Rucka in his writing of this set and well thought out to come up with it before Afghanistan / Taliban takes the world stage.

Queen & Country is a completed series, I believe. There is discussion that Rucka will launch a new Queen & Country series, but we can rest assured that this first sequence is complete. There are eight collections in the main series, plus three Declassified collections that tie into the main series. 32 issues + Declassified.
Posted by Joe on Tuesday, April 28, 2009
Email ThisBlogThis!Share to TwitterShare to FacebookShare to Pinterest
Labels: Greg Rucka, Queen and Country