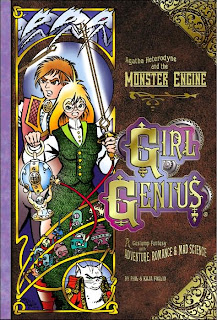 After Queen & Country, the second series I would like to talk about is Girl Genius. Nominated this year for a Hugo Award, Girl Genius is an online comic which has also been collected in book form*. The cover of each volume tells us this is a story about “Adventure, Romance, MAD SCIENCE!”, and that’s exactly right. This is steampunk (of sorts), though Foglios describe it as Gaslamp fantasy – whatever that means.

This is the story of Agatha Clay, the last living scion of the Heterodyne family, a family of inventors (called Sparks – it’s a serious and rare talent of mechanical creation) with a mixed reputation. Bill and Barry Heterodyne were heroes, but there is a dark history to the family. Agatha is one of the good guys and spends much of the series on the run from Baron Wulfenbach – a very powerful Spark who rules with an iron fist. Baron Wulfenbach appears to be a simple maniac dictator, but the longer the series goes the more interesting he becomes. There’s more to this character. Actually, there’s more to everybody than is first let on.

There are airships, robots, weird violent monster-people with sharp teeth and German accents (Jagermonsters), a talking cat (awesome!), and a whole lotta adventure and action and snappy dialogue.

Girl Genius is brightly drawn (excluding the first issue) and is just a whole lotta fun to read. This really is a grand adventure of alternate history (though most cities / locations are not recognizable, Girl Genius is set in continental Europe. I’m not sure what the time period is because the existence of Sparks has seriously changed the political landscape. I think.


*To be accurate, the first four collections are of the original print comic. The Foglios later switched Girl Genius to the internet and Volume 5 begins the collections of the webcomic).

There are seven volumes currently in print, with an eighth coming out this summer.

The picture is for the third volume, just in case you were wondering.
Posted by Joe on Wednesday, April 29, 2009
Email ThisBlogThis!Share to TwitterShare to FacebookShare to Pinterest
Labels: Girl Genius, Kaja Foglio, Phil Foglio

Girl Genius is awesome. It keeps getting better as the series goes. I'm up to volume 7.

Ok, super off-topic here...but I'm wondering how you actually get your books?? I'm thinking of signing up for this Netflix-of-books type thing called BookSwim - they have this 3 books per month plan that starts at $10. Just curious for your input on the subject, oh worthy reader!!!

So, yeah. Library. Love it. Support it. Would take it on a date if it wasn't an inanimate building made of stone and stuff.

BookSwim may work out if you don't have access to a decent library system, but alternately you can check out used book sites like abebooks.com, half.com, and Amazon. Depending on what you're looking for you can get books for really cheap (including shipping) and it would work out not too different than BookSwim.