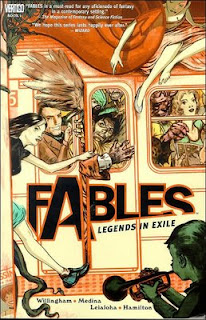 The third (and final, for now) series I want to talk about is Fables, written by Bill Willingham.

This is my favorite series running, right now, surpassing any retroactive geek-love I have for Buffy the Vampire Slayer: Season 8.

Fables is a currently ongoing series which focuses on Fables, the characters from our fairytales and various fables. The Fables, as they have named themselves, originally lived in their various worlds of fairytale until their Homelands were invaded by The Adversary. As of the third issue, that’s about all we really know of the Big Bad of Fables. The Adversary. Many lives were lost, the Homelands taken over, and over hundreds of years the Fables have made their way to our world. There is a community in New York City known as Fabletown. That’s where the human-looking Fables live. The animals (such as the Three Little Pigs) who cannot fit into Mundy (i.e. human, or mundane) society live up at “The Farm” in upstate New York. That’s the setting, though I believe other Fables live elsewhere in the world. I think that’ll be borne out in future issues. I’ve only read the first three collections.

Snow White is the Deputy Mayor of Fabletown. Old King Cole is the Mayor, but Snow runs things. She’s divorced from Prince Charming after she caught him in bed with her sister, Rose Red. Major characters in the early issues include Bigby Wolf (the Big Bad Wolf, now able to take human form, reformed, and the Sheriff of Fabletown), Blue Beard, Rose Red (Snow’s sister), The Three Little Pigs, Bluebeard, Goldilocks, Prince Charming, Jack (of Beanstalk fame), and Little Boy Blue. Among other smaller characters who may (or may not) get larger starring roles later.

What works so well about Fables is that Bill Willingham tells the story straight. Assuming that all of the background stuff occurred (the Adversary and such), what would the characters do if put into our world and wished to hide their identity? There would be relationships, squabbles, fueds, revolution, wistfulness, getting on with it, and everything that is all tied together in the larger story called Fables.

Oh, it’s good. I knew midway through the first collection that this was going to be a favorite of mine. The first three collections have borne this out. Fables is damn good with an ever broadening and evolving story. Even through the first three collections there are a number of story arcs, small one offs, and the over-reaching arc of Fables vs Adversary. Just because the Fables have left their Homelands, it doesn’t mean that war is over. What happens if the Adversary turns to our world? Is he / it only after Fables or is he / it after everything? I honestly don’t know the answer to that question, but I’m hoping Willingham gets to it.

There’s just so much going on here.

There are 11 collections currently in print, with volume 12 due in August 2009. I don’t know how far they are at in single issues. I prefer collections. There are two spin offs - Jack of Fables, a series dealing with Jack (obviously), and a single prequel collection 1001 Nights of Snowfall. There are rumors / suggestions of other spin-offs / one-shots touching on other aspects of the Fable Universe.

All I know is that this is good stuff. I’ve got Volume 4 at home and the fifth on its way from the library.
Posted by Joe on Thursday, April 30, 2009
Email ThisBlogThis!Share to TwitterShare to FacebookShare to Pinterest
Labels: Bill Willingham, Fables

Is it possible to buy this graphic novel online?

Any online bookseller would have it. Amazon, Barnes and Nobles, Borders. I assume Powells.