Come Closer, by Sara Gran: A creepy, chilling little book. Amanda has a good life, a good husband, a good job. Then her life begins to unravel. Maybe she needs more sleep. Maybe the tapping in her walls is nothing. Maybe she isn’t becoming possessed by a demon. Maybe. It begins slowly, this slim little volume of horror. It is little things. Amanda hears and sees things that aren’t there, that nobody else sees. Visions from her past. Little by little her life pulls apart and she isn’t sure why. As Come Closer progresses the story gets creepier and creepier and then downright nasty. Written in short chapters and clear sentences, Come Closer is a small gem of horror. 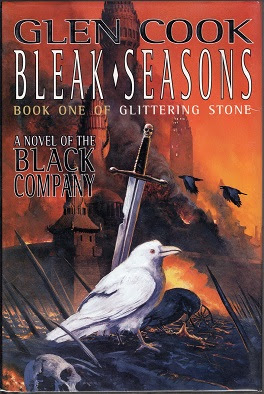 Bleak Seasons, by Glen Cook: This is the first time I have been truly disappointed by a Black Company novel. Sure, I thought The Silver Spike was kind of pointless because it was an offshoot novel that did not really tell me anything new or essential, but Bleak Seasons is part of the main sequence of The Black Company. It is the first volume in the four volumes of The Glittering Stone which will wrap up The Black Company series (provided Cook does not write any more novels of the Black Company). Bleak Seasons should tell me something new, should advance some story, should do something new. It doesn’t, not really. Bleak Seasons picks up not long after the first battle at Dejagore where Lady is lost and Croaker is presumed dead. Dreams of Steel taught us otherwise and reunited, briefly, the Company. Lady, Croaker, and Murgen were going to put things to rights. Now, when Bleak Seasons begins we see things from Murgen’s perspective before Croaker and Lady return, while Mogaba is still running Dejagore. Ugh! Yeah, Glen Cook throws in some twists with odd visions of Murgen, a wife, moving backwards and forwards in time, but it is not until the last few chapters that there is any sense of plot advancement. The Murgen vision thing was a big confused mess. I had no idea what time period the novel was supposed to be taking place or how the visions connected to the true story. Unless She Is the Darkness tells the story of Mogaba, we should finally have some advancement in the story....Murgen is now the Annalist, but hopefully the earlier strengths of the Black Company novels will return. Big disappointment.

Enemy Lines I: Rebel Dream, by Aaron Allston: After the disaster that was Dark Journey,

Aaron Allston tightens things up a bit with Rebel Dream. There is still a sense of the plot being a bit too wide open and that the New Jedi Order needs focus, but at least Aaron Allston is a pleasure to read. He even threw in a Ewok pilot joke (see his excellent Wraith Squadron novels), so all is right with the world. Slowly moving things along here, but a fun read. This just brings me one book closer to Matthew Stover’s entry...and that’s worth waiting for.
Posted by Joe on Monday, September 24, 2007
Email ThisBlogThis!Share to TwitterShare to FacebookShare to Pinterest
Labels: Aaron Allston, glen cook, Sara Gran