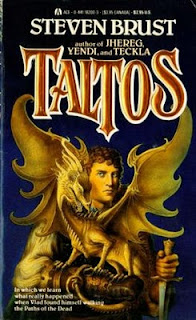 Taltos is the fourth of Steven Brust’s Vlad Taltos novels and for the first time, I really understood the Zelazny blurb that has graced the covers of the three previous volumes.

As per his norm, Brust is working on multiple levels telling at least two different stories at different times to drive home the main story or theme of the novel. Assuming there is just one. You never know with Steven Brust. You just don’t. What you get out of one of Brust’s novels likely depends on your emotional age, life experience, which of his previous books you’ve read (if any) and how much you remember from them, and whether or not this is your first time reading the book.

This is not to say that a Steven Brust novel demands a steep price for admission or that it requires a learning curve. Brust will trick the reader and suck them in so that they feel comfortable all the while he continues to paint a rich history of a city and a land and tell a story through the nimble narration of a gangster and an assassin for hire AND raises questions of ethics, morality, loyalty, friendship, and love. At first glance all this stuff in the book is simple, but it isn’t.

Taltos is a novel about beginnings.

In the previous novels, Vlad is already well established as a capo in the Jhereg, controls a bit of territory, and has powerful friends. Taltos tells of how that came about.

There are three distinct parts to this novel: the story of how Vlad joined the Jhereg Organization and began his rise of responsibility; the story of Vlad’s first meetings with Morrolan, Sethra Lavode, and Aliera, and his “walking the Paths of the Dead”; and finally and most obscurely, Vlad’s preparation to create and perform a complicated spell / ritual. Of the third, there is no sense throughout most of the novel of what that spell may be for and, more importantly, when it is occurring.

Each chapter begins with a novel excerpt of the spell. The rest of this short novel bounces back and forth between Vlad as a beginning gangster and Vlad’s job for Sethra which eventually takes him to the Paths of the Dead. At times a moment is required for the reader to reorient and fix on which story is being told, but ultimately it is a story of beginnings, and of the shaping of Vlad’s life and career.

It is difficult to describe exactly how Brust “moves fast”, as Roger Zelazny so aptly described him. But, the fact is that there is a nimbleness to Brust’s storytelling. The Vlad Taltos novels are short, yes, but Brust also keeps readers turning the page as fast as they can just to find out what happens next. While Steven Brust is always one step ahead of the reader, he laces the novel with casual detail that later turns out to be anything but. Between the very self aware and quick witted narration of Vlad and the deep emotional politics of human / Draegaran relations, Brust does indeed move fast, but he does so while presenting a smartly written and an often funny story.

While those who have read the three previous Vlad Taltos novels will get a bit more out of Taltos, this is an otherwise excellent place to jump in to the series and see what it is all about. Regardless of whether one is working the series in publication order, chronological order, or just discovering it for the first time, Taltos comes highly recommended.