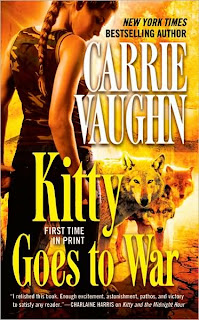 
Set within a framing device of one of those conspiracy theories that can be spun out from those late night radio talk shows (one of which Kitty Norville is the host of), Kitty Goes to War is, at its heart, about exploring a different aspect of lycanthropes and what the human impact is.

First, the framing device. On one night of her radio show Kitty explores the theory and rumor that “something weird is going on at the Speedy Mart” and asks for her listeners to call in and report what they know and what they have heard. This leads to a variety of reports of weirdness and also leads to Kitty and the radio station being sued for libel by the CEO of Speedy Mart (he was also mentioned by name on the show). The framing device is the investigation into Speedy Mart and the conflicts which ensue. This ties into a larger conflict and story arc which Carrie Vaughn has been dancing around for several books now. It’s the hint that there is something much bigger out there and that Denver is only a small part of that something which goes far beyond the personal conflicts.

Carrie Vaughn’s slow build of this larger conflict is well done and where she really succeeds is keeping her focus on the smaller personal stories. Framing device notwithstanding, Kitty Goes to War answers the question that has surely been asked over thousands of years or longer: Is there a military application to using werewolves in combat? Given that lycanthropy enhances strength, speed, and endurance, and also bestows an almost magic-like self-healing ability, the answer is assuredly yes. Of course there is.

Dr. Shumacher, originally introduced in Kitty Goes to Washington and still working for the National Institutes of Health’s Center for the Study of Paranormal Biology, contacts Kitty because there are three soldiers just returned from Afghanistan who need help. The soldiers are, one may have guessed, werewolves and to say that they are not coping well would be a drastic understatement.

Here Vaughn shines. The depiction of Kitty fighting to allow these soldiers a chance at true rehabilitation is touching, as is the varying brokenness of these men turned soldier turned werewolf who have given nearly all to serve their country. Vaughn’s portrayal of the soldiers each suffering from the same trauma but being broken in different ways is important. Vaughn handles this very delicately, but with assurance that she knows what she is doing and what she is writing about.

Despite the title, Kitty Goes to War is not The Great Werewolf War (though that story may come later) and it is not about werewolf soldiers in combat. Werewolf or not, it is a story about soldiers coming home and dealing with their trauma. It is about belonging and healing and hope. The heart of the Kitty Norville novels has always been the small personal stories and, typically, Kitty dealing with a situation that is almost out of her presumed skillset – except that each situation forces Kitty to struggle and grow and overcome. Kitty Goes to War continues Carrie Vaughn’s streak of writing excellent Kitty Norville novels and only leaves the reader wanting More Kitty Now. Alas. The reader must wait.