strange conversations you don't expect to have 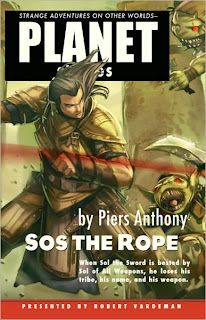 Which is why I was surprised to find myself in a conversation yesterday at Fourth Street discussing the good parts of the Piers Anthony oeuvre.

I believe it started with someone mentioning that she remembered seeing a note in a volume of the Incantations of Immortality series that Anthony needed to take a break from the series because he needed some fast money and was going to return to Xanth to quick churn out several volumes in quick succession. I would be curious to find out which book that was so I could try to backtrack and figure out which Xanth novels were the cash grab. Regadless, this person said that she immediately lost all respect for Anthony.

I replied that I would have gained respect for the man. At least it was upfront and honest and since we really don’t know what his situation was, it’s hard for me to judge that. Maybe it was medical or family related.

On the other hand, I remember reading an interview with John Grisham where he baldly stated that he had to turn in a new novel every year to eighteen months to be able to “maintain his standard of living” and that just rubbed me exceptionally wrong.

Of course, it is difficult to understand motive on a potentially apocryphal story for Piers Anthony.

What was interesting, though, was the rest of the conversation turned to the stuff Anthony did well. The early Xanth novels before he punned his readers to death. Macroscope came up (nominated for a Hugo, even), as did a couple of other books. I mentioned the Battle Circle trilogy.

Battle Circle, if you are not aware, is a trilogy comprised of Sos the Rope, Var the Stick, and Neq the Sword. It’s a sword & sorcery type of story, only set on a post-apocalyptic Earth. I haven’t read them since I was a teenager (so, about fifteen years ago), but I remember being entertained by the storytelling. They’re a bit shlocky, if memory serves, but decent enough.

Piers Anthony was my gateway to twenty years of actively reading fantasy and science fiction, starting back when I was in seventh grade and overhearing a couple of kids talking about how awesome and “adult” the Xanth novels were. How the other kids weren’t mature enough for them. I laugh now, but immediately following my family’s move from Staten Island to Minnesota, I had everyday access to the Rush City library and sought out those books and absolutely loved them.

Today I don’t think I could pick up a Xanth novel after book 10 (if not book 7) and make it through, but back then…couldn’t get enough and I was current through everything that was published.

So, it was with weird fondness that I was part of that conversation, remembering back when Anthony was spinning entertaining tales and didn’t require 5-10 pages at the back of each book identifying what ideas came from his readers. The description of Macroscope that was given made me exclaim, “man, that was back when he could still THINK!”, in pure surprise at the inventiveness of it all.

It was a weird conversation, but pretty damn cool.
Posted by Joe on Monday, June 28, 2010
Email ThisBlogThis!Share to TwitterShare to FacebookShare to Pinterest
Labels: Piers Anthony

Back in the day, "we" (I and a few people I knew) used to say that Piers Anthony wrote some great books, but that he stuck with a series too long and then it became mediocre and then just bad.

Xanth: Great for the first 4, slipped to very-good/good for #5-7, then went downhill.

Adept: The original trilogy was great, but the return years later for a second go was mediocre at best.

Incarnations of Immortality: Like Xanth, it started great but trended steadily down. I think the first two were the best.

He had some very good stand-alone and short series, though. I haven't read Macroscope or the Battle Circle books, but I recommend:

- The Of Man and Manta (as I saw it called somewhere) series (Omnivore, Orn, and OX) was very good

- As I recall (it's been years), The Ring (with Robert Margroff) was good.

- Rings of Ice was surprisingly good; the stupid back cover copy on mine put me off it for a while, but I finally read it (years ago) and it was very good.

- The Tarot series was good IMHO (though weird and, well, a bit over-the-top sex-wise--though at the age when I read it, I didn't mind ;-).

I can't argue with that.

I just did some quick research and assuming it is correct, Piers Anthony has been nominated for the Nebula and Hugo Awards 5 times EACH.

"Before he punned his readers to death."

I'll be laughing at that line all morning.