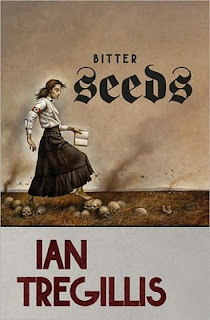 
Folks, it is time to check out the debut novel from Ian Tregillis, Bitter Seeds. If you’ve been following the Wild Cards series, you will likely recognize the name as a contributor to the recent triad of books (Inside Straight, Busted Flush, Suicide Kings), but with Bitter Seeds Tregillis offers up a very strong story of an alternate World War II.

Bitter Seeds is a different sort of alt-history novel than one would envision from, say, Harry Turtledove. Tregillis plays the war straight and doesn't deviate quite as far from history, but instead introduces a couple of slight twists that adds another facet to the conflict. Bitter Seeds presupposes that the German attempt to genetically modify humans into “super” men was successful. These super-soldiers, having undergone a lifetime of hardship and modification, are able to manipulate their bodies to produce a form of telekinesis, precognizance, flight, or, the case of one soldier, pyrokinesis. One ability per person. With these super-soldiers, Tregillis appears to be taking some of the lessons learned working on the more realistic super-heroes of Wild Cards and dials the realism up one more notch to make these individuals products of scientific engineering.

On the more supernatural side, the Allies have access to a form of witchcraft – though while the term and forms are familiar, the end results are not.

Wild Cards 3.0 this is not. Ian Tregillis is not telling a story of witches versus mutants battling it out for supremacy. The storytelling and the realism (if you accept the presuppositions required for entrance) are much tighter and closer to home.

There are three primary viewpoint perspectives in Bitter Seeds. Raybould Marsh can be considered the primary protagonist of the novel (if there truly is such) and is a British intelligence agent involved in Milkweed, a secret branch / team devoted to combating the unnatural aspect of the German threat, and using unnatural means to fight the war. Second is Will, Marsh’s good friend and one who has a heritage of witchcraft. Third is Klaus, one of the German “super soldiers”. Through Klaus the German perspective of the common soldier (or uncommon, as it may be) is humanized. Through Klaus, Tregillis reveals more about the capabilities and limitations of these super-soldiers – which really are little like any “super-soldier” the reader is likely to imagine.

Through these three limited viewpoint perspectives, Tregillis tells the story of Bitter Seeds at not quite a “boots on the ground” level, given that all primary characters would be considered officers, but still from the perspective of individuals not truly in charge of their own destiny trying to do their part to fight with the best of their abilities against the enemies of their nation. Bitter Seeds is just above the mud action that still gets the characters dirty.

Bitter Seeds requires a little bit of time to acclimate to and figure out what story is being told and how, but once the reader immerses into this fight, Bitter Seeds will stand as one of the better novels of 2010 and an excellent debut to what will hopefully be a long career for Ian Tregillis. Bitter Seeds is the first volume in the Milkweed Triptych and while it is the first of three novels, the story told here is complete and allowing for closure while still allowing that stories and lives do not just end when the last page is turned.

Can't wait for the next book.

I agree with you - this is a stellar debut.

Can't wait to see what he does next with the series. Things are about to change.

That sounds really interesting! I will definitely need to check it out. I read one Wild Cards book a while back and liked that setting a lot.