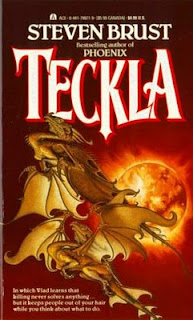 Sometimes I think I shouldn't read Jo Walton's Tor.com posts because even though she turns me on to all sorts of awesome books, I struggle to then write about them. That's where I've been at with Teckla. I finished the book and have been staring at it for a week now, unsure where to begin. I'll begin with Jo Walton. Think of this as part of a conversation.

Teckla is set in the same fun fantasy world of Dragaera as the first two books of the series, but unlike the romps that are Jhereg and Yendi it’s a real downer.

My reaction was less strong than Walton's, but I understand where she is coming from. The Vlad Taltos novels jump around in time a bit, but Teckla can be considered a direct sequel to Jhereg. It does require, at the very least, to have read Jhereg to have a stronger emotional resonance. Teckla is a novel which deals with the deteriorating relationship between Vlad and his wife Cawti. Vlad and Cawti met when Cawti killed Vlad (see Yendi). They were both assassins and they are both human in a non-human ruled society. That's not the basis of their relationship, but it serves as a starting point for talking about it. When they met, after Vlad was resurrected, Vlad and Cawti were particular people. They were who they were. As time passed, though, Cawti became involved with Easterner (read, human) rebels in Adrilankha. Vlad was still an assassin for the house of Jhereg, a human working for the Dragaerans.

People change, become more and other from who they once were.

That's part of the story Teckla is telling, from Vlad's perspective of his wife doing something he very much does not agree with and which he cannot be a part of. It's the story of his frustration, and hers. Of his desire to keep her and keep her safe, or hers to improve the lot of the Easterner ghetto of Ardilankha.

Walton called Teckla "a real downer", and she's right. Much of the fun and excitement of the first two novels is missing here. Vlad's not happy and this series is narrated from Vlad's perspective (to whom is an interesting question that has not been addressed and isn't really the focus here). The narrative is shaped by Vlad's perspective on what is happening and yes, things are a bit depressed.

The thing is, Brust’s storytelling is as strong as ever. Teckla is a very tightly contained novel. Vlad’s allies of power (the Morrolan, Aliera, and company) don’t show up and the real conflict of the novel is Vlad’s emotional one. Yes, there are physical threats to overcome, but this is about Vlad and Cawti, not about assassination – though, to be fair, I’m not sure Jhereg or Yendi were really about assassination either. Interesting how Brust is pulling off a series centered on an assassin where the assassinations are very much not the focus of the story. It works.

So, Teckla. This one likely needs a re-read. I’m fairly neutral on it, perhaps because of the draining emotional baggage of a failing marriage. Vlad comes across as being somewhat emotionally tired and somewhat deadened in Teckla, not knowing exactly how to fix things or even what needs fixing. Coming from the perspective of Vlad, the reader picks up on this quite quickly. Unlike Jo Walton’s first experience with the novel, Teckla did not evoke a strong response from me. Teckla simmers and likely will be best appreciated when viewed through the lens of the larger story.