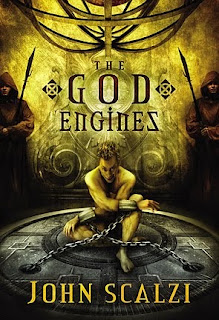 
John Scalzi has been criticized in the past for his use of a singular voice in his novels; that his characters nearly all come across with the same wise-cracking tone. Whether or not the accusation is true, it is not one which can be leveled at The God Engines. Compared to his previous work, The God Engines is a radical departure for John Scalzi, though he continues to be able to craft a strong opening line to hook the reader.

It was time to whip the god.

Oh, yes. It was time to whip the god. The god in question was a captive god in servitude. The god’s capitulations powered the ship in some unknown manner and this god was fractious. The opening premise of The God Engines has Tephe, the ship’s captain, requiring the god to obey and using physical coercion to make him do so. What follows is a battle of wills, an examination of religion in this fantasy world, and a questioning of what is truth. It’s also a good story.

The God Engines represents John Scalzi stretching himself as a writer. His five previous novels all share a similarity of tone and style, and though Scalzi may rightly be proud of pulling off the voice of a teenage girl in Zoe’s Tale, Zoe Boutin-Perry is still very much in the mode of the wise-cracking protagonists of the series. Interestingly enough, the other piece of fiction which represents John Scalzi stepping away from what may be viewed from outside as his “comfort zone” is his previous SubPress novella The Sagan Diary. There Scalzi wrote what was a series of very personal diary entries from his character Jane Sagan and it was nothing like the Old Man’s War novels and it was very, very good.

Here John Scalzi tries his hand at fantasy for the first time and, unlike so much of his science fiction, his characters in The God Engines are not fast talking and wise-cracking. They are quite serious and the overall tone of the novella is much darker than anything Scalzi has previously published.

Readers may have been concerned whether John Scalzi could pull off something so different from what he did so well.

The answer is yes, yes he can.

There is a central conceit to The God Engines which is set up at the end of the first chapter and which this review is studiously not talking about. It is a part of the discovery of the story, and though knowing it spoils nothing, some things are still better off waiting to learn only when they are revealed as part of the story. There are plenty of surprises to be had in The God Engines and John Scalzi continually confounds any expectations of which direction the story is going.

The God Engines is quite an excellent novella and I hope Scalzi takes the time to perhaps write additional stories in this milieu, or to just continue to write stories so different from his bread-and-butter. They tend to turn out when he does.
Posted by Joe on Monday, March 08, 2010
Email ThisBlogThis!Share to TwitterShare to FacebookShare to Pinterest
Labels: John Scalzi, Nebula Awards