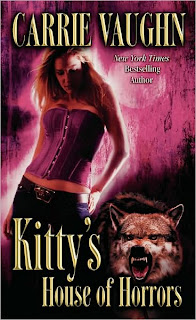 What does a popular radio show host and the most famous lycanthrope in America do after she gets married in Las Vegas? If you are Kitty Norville, you accept an invitation to be on a supernatural themed reality show filmed at a palatial resort cabin in the wilderness of Montana. If you are Kitty Norville, this won’t be the two week vacation you anticipated. This is Kitty’s House of Horrors, the seventh novel from Carrie Vaughn featuring the midnight radio show host and werewolf.

By this point in the series Carrie Vaughn should be running short on ideas and Kitty’s welcome should be wearing thin. It is entirely to the credit of Carrie Vaughn that Kitty’s House of Horrors feels as fresh and new as the first volume, Kitty and the Midnight Hour. Through each volume and each “adventure”, Kitty Norville has grown in confidence and grown as a character, much as anybody might if put through similar circumstances. Kitty is recognizably herself, but the Kitty Norville of Kitty’s House of Horrors is much stronger and self-assured than the Kitty Norville of Kitty and the Midnight Hour. It is maturity and it is part of the success of Vaughn’s fiction. There is character development and Kitty is not Super-Wolf-Girl. She fears and she perseveres.

Where previous volumes had varying levels of conflict, violence, and deadly risk to Kitty’s life, Kitty’s House of Horrors takes the story to full-on survival horror mode. Suggesting that things do not go “well” in Montana would be a vast understatement. Kitty and the other participants in the reality show Supernatural Insider think they are going to Montana to convince a skeptic that the supernatural is real, but end up hunted to the death.

Carrie Vaughn does well with her entry into the survival horror genre. Kitty Norville brings humor and personality to a grim situation, but Vaughn doesn’t relent on the grim. Kitty is in a bad place and Vaughn gets that across.

Something of particular note about the series is that Carrie Vaughn took one of the more interesting characters of the first three novels and, because of his actions, took him out of commission for the next four books. I’m referring to Cormac, the bounty hunter of the supernatural and friend to Kitty. Next to Kitty, Cormac was the most compelling character of the first three novels and he’s been out of the picture ever since. In Kitty’s House of Horrors, Kitty’s husband Ben mentions that Cormac is up for a parole hearing. So, in the midst of Kitty fighting for his life, readers know that life in Denver hasn’t stopped.

Also, Carrie Vaughn continues to tease a larger storyline of a bigger supernatural conflict, one which Kitty may only be a small player in, whether she wants to or not. Vaughn has been slowly unspooling the nature of this threat while telling personal stories for Kitty. It is well done. Carrie Vaughn continues to impress and improve with her Kitty Norville novels. That there are three more planned is good news.

I just finished this one and really enjoyed it. I was going through Kitty burn out but this one renewed my interest. Maybe it's because there wasn't so much Ben :) I'm not a big Ben fan and I'm glad for the Cormac news in this one!