A Brother's Price, by Wen Spencer 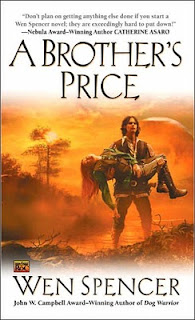 Imagine a world where women outnumber men by a factor of something like twenty to one. Women are the soldiers, the butchers, the bakers, and even the candlestick makers. Women do all the jobs that, in another world, might be considered “men’s work”. Because of their scarcity, men are heavily protected and valued for breeding (if a husband) or for building alliances in trade or sale (if a brother). The gender roles in this world are completely flipped.

The basic plot structure of A Brother’s Price is fairly simple and standard. Boy meets girl. Boy falls in love with girl. Girl falls in love with boy. It can never be because girl is a princess and boy is not a prince, except, you know, maybe he kind of is. Will love win out?

The twist, of course, is that it is the girl that has to pursue the boy and have her family negotiate with the boy’s family regarding any possible marital union. Jerin is loved by his family, but Jerin is also a commodity and his “brother’s price” could earn his sisters a husband or a good deal of money. If he remains pure.

Without assuming the intentions of the author, my impression is that the point of this book is to tell a straightforward romantic adventure story with a pointed flip of gender role. The flip serves to make the reader think about the social mores of this culture. Is it right for men to be treated as property, even humanely? Is this right?

The quick answer is that no, it isn’t. That despite their relative scarcity in this world, men should be as free as the women are. Free to be whatever they want to be. Those are our modern American mores and are what we feel are basic human rights.

This may be the point, to force us to examine more closely the historical role of women in society.

Now, perhaps that is too obvious. Perhaps part of the point is to answer the assertion that if women ruled the world, everything would be different and so much kinder. A Brother’s Price tells us that it will not, but that women are just as capable of ruling and creating technology and culture.

Had Spencer chosen to tell A Brother’s Price with traditional gender roles, this would likely be viewed as a deeply offensive novel. Instead, because of the flipped gender roles, the reader may experience some discomfort, but not the level of offense as yet another repressed woman story would cause.

Here’s the thing, though. I spent all this time talking about what the novel might be saying that I haven’t spent a single word on what it did. That’s because the largest part of me is more fascinated by what is or may be going on behind the scenes.

The reason I spent all these words on the behind the curtain stuff is because A Brother’s Price is a book I could not put down. I read A Brother’s Price in great big chunks and I was completely wrapped up in Spencer’s storytelling. Sure, this is a fairly standard story with a twist, but it’s damn compelling. Readers can fairly well guess how this is all going to end, and there is a little bit of a telegraphed “surprise” coming near the end, but it doesn’t matter. Once you start reading A Brother’s Price, you’re going to want to continue to the end.

This is a believable and rich world. There is a history to the setting and to the characters, and though A Brother’s Price is a standalone novel, I would really love a chance to visit the Whistlers once more. Spencer left me satisfied with the story she told, but also left me wanting more.
Posted by Joe on Wednesday, February 03, 2010
Email ThisBlogThis!Share to TwitterShare to FacebookShare to Pinterest
Labels: Wen Spencer

Color me intrigued. I have seen me a new novel on the horizon. Great take and yes, if the gender roles had remained the same, I gather that there would be hell to pay with all the sexist and gender scandals in the publishing industry right now.

Actually, if the gender roles had remained the same, it would've been a Regency romance. I think that was the point -- to do a traditional romance-novel format with a man as the object of desire and repression, instead of the usual woman. And maybe encourage people who would otherwise never be caught dead reading a Georgette Heyer novel to check out something similar. :)

I was intrigued by the background too, and wondered how this world worked in other societies. Do the caliphates have harems of men, guarded by female eunuchs? (Not sure how that would work, but I'm sure somebody would figure out something.) Did Europe survive the bubonic plague at all, since more women than men tended to survive the disease if they got it? Were there long-haired beautiful men living on estates in Heian Japan, having women perform poetry or feats of daring for them, in the hope of sex? This world had no Native Americans -- which I found problematic -- but is there a reason for that? Maybe the smallpox and other plagues that (in our world) killed off 90% of the Native Americans upon Europeans' arrival got all the men, which ruined any hope of recovery.

I keep hoping Spencer will write a sequel and touch on these things... but that's me, the science fiction and epic fantasy lover, wanting this book to be what it isn't. It's a Regency, plain and simple, and best read as such. It's got a stock Regency plot: boy meets girl; boy negotiates complicated social mores in order to get girl while keeping himself chaste and considering his family's needs; boy marries well, which doesn't necessarily mean boy gets the girl he wants, but that's what counts as a happy ending in a Regency.

(Got lured here by your shout-out about the Nebs; hi!)

Hi N.K.! (not sure how you feel about folks using your first name in public-like, and it's not as if I actually know you - but I tend to think of J. K. Rowling as Jo Rowling, and likewise with you by your first name - wow, that was an over-long parenthetical into how my brain works. Sorry about that)

And one last - congrats on the nomination! Woo!

Okay, I can see what you're saying about the Regency and what Spencer may have been doing with the gender roles. Makes perfect sense.

As a Regency or as a SF tale, Spencer told it very well and I was hooked into the fairly stock plot of A Brother's Price, but I have deep concerns that if I tried to read an actual Regency that I'd be more troubled by the traditional repressed gender roles and stock-ness of the story.

I guess I could give one a shot, but I'm kind of prejudiced against them from the start and the one thing that saved A Brother's Price for me was the flipped gender roles. Put them back in their "proper" place and I would tend to run away flailing my arms. But that's just me.

Like you, though, I very much wanted to know about the rest of the world. There have to be more tales left to tell there. Surely there is an audience.

It's just not the story Spencer told. Or, it is, but she didn't tell more - either as Regency or as different sorts of SFF novels.

Have you read any other Spencer? Anything I should check out?

I found it more offensive with the gender flip, actually. If it was told the logical way, then I would just assume it was reminiscent of the Middle Ages. The truth is that I can't imagine males putting up with treatment of that sort no matter how many of them there were. Men are not the same as women, and its not nurture. Its nature. Men prefer competition, women cooperation. Men prefer doing, women prefer talking. Anyone who has ever taught kids will tell you this. You know what a good way to get a boy to do something? Say "I bet you can't…". It doesn't work on girls. It bothered me so much, I stopped reading, assuming that the writer was an angry feminist.