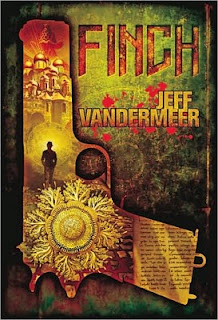 It begins with two dead bodies and an investigation. Only one corpse is human, the other a grey cap, one of the fungal overlords of occupied Ambergris. John Finch, human, is the detective tasked to discover the identity of the victims and the cause. Finch is not simply a noir detective novel, but to attempt to talk more about the core plot and betrayals and rebellion and fear and mysteries of Ambergris would be folly and miss the mark.

Finch is not simply anything. It is a mystery that begs for unraveling, though unlike the hypothetical onion, readers are not likely to see all the layers they peel away and they may not recognize the core. That’s okay. There are plenty of different ways to read Finch and all of them are wholly satisfying. There is Finch for the Vander-neophyte, which is semi-straight forward in the detective tale. The ending is less important than the journey. The answers Jeff VanderMeer provides for long time readers of his work serve as teasers for the new reader, and those are just the ones the new readers will recognize as referencing the earlier work. The Vander-faithful will be rewarded for what may well be their last trip through Ambergris in a story set a few hundred years after they first visited. Changes are afoot. Other readers will look for the political aspects of the grey caps building two towers and the nearly broken rebellion the humans insurgents are still fighting against the occupying grey gaps. There is a lot to Finch as told through a not entirely straight forward narrative.

While the staccato prose of Finch is initially off-putting, after only a few pages the rhythms of Jeff VanderMeer’s writing seeps in and becomes part of the discordant atmosphere of Ambergris. The city is rotted and somehow the short sentence fragments helps to convey this fungal rot.

The doorknob cold but grainy. The left side rough with light green fungus.

Sweating under his jacket, through his shirt. Boots heavy on his feet.

Always a point of no return, and yet he kept returning.


This is fantastic stuff. The above quote jarred at first, but now feels perfect. The rest of the novel builds from there and, not to use cliché about a book “grabbing hold and not letting go”, but once the Ambergrisian rot settles over the reader, this is a city the reader would never wish to live in but will also not want to leave. This is a novel which commands attention from the first framing page of an interrogation and which rewards both careful and casual reading.

Longtime fans of VanderMeer’s Ambergris stories will likely have a number of lingering questions answered, but prior knowledge of Ambergris is not a requirement for admission to Finch. VanderMeer provides everything a new reader needs to step into Finch and not feel any more lost than VanderMeer intends the reader to be. Finch is a incredibly well crafted novel and should be on everyone’s short list of novels to read next. Finch is a novel to be excited about.


I'll go one further, now that I'm out of the bounds of the review. I was initially very skeptical of Finch because I had previously attempted City of Saints and Madmen and while I recognized the craft, I wasn't engaged (or, perhaps, I didn't engage well enough with the early Ambergris stories, not sure it really matters at this point). I just didn't connect with the stories. It happens. I chocked it up to stuff that just doesn't work for me for some reason. On the other hand, I completely "got" The Situation. Now, though, I want to go back to City of Saints and Madmen and see how I respond after the inoculation of Finch. And also read Shriek: An Afterword.

This is to say that I have a weird relationship with Jeff VanderMeer's fiction before Finch, but I'm damned passionate about the awesomeness of Finch. I really want people to read this and love it as much as I did.
Posted by Joe on Monday, February 08, 2010
Email ThisBlogThis!Share to TwitterShare to FacebookShare to Pinterest
Labels: Jeff Vandermeer

Great review, Joe. I have been interested in this one since the moment I saw that fantastic cover illustration. I haven't read any of VanderMeer's work previously (unless there is a short story out there in some anthology that I've forgotten about) but this one sounds like it has so many elements of story types that I enjoy that I cannot help but want to check it out for myself.

Yup. Read this one myself for review a few weeks ago and I was - not to give credence to such excessive metaphor - quite blown away. I'd read Vandermeer in the past but this is a startling break from his norm, and though I'd agree with Joe that it's farily standalone, it does rather hinge on a few plot points from the last Ambergris novel, Shriek: An Afterword, so if you think there's a chance you'll want to go back, Carl, probably best not to start out with Finch.

Great review as ever, Joe.

It ties to Shriek, but I think starting starting with Finch is the perfect way to go.

Finch probably ties to the earlier stories in ways that I don't recognize, but this is still a great entrance point to Ambergris.

Jarring is putting it lightly, concerning the excerpt you choose. I am going to read this book but it seems I may have a manic moment and a martini before I get through it.

Chad: Jeff does use verbs, but there are enough fragments to initially jar the reader. One gets past it quite quickly.