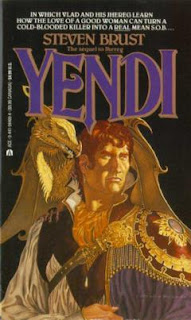 Rather than picking up in Yendi where he left off in Jhereg, Steven Brust’s second Vlad Taltos novel takes the reader back to a time in which Vlad was still increasing the amount of territory he would control as a capo in the House of Jhereg.

Yendi tells two stories. First is the conflict between Vlad and Laris, a neighboring crime lord encroaching on Vlad’s territory. This conflict flamed into a street war which attracted the notice of the city’s ruling elite. The second story is of the meeting of Vlad and Cawti, the woman who would later be his wife. A good portion of Yendi details some of Vlad's background that was not covered in Jhereg, though this is something likely to continue throughout the series.

On his website, Brust has this to say about Yendi.

My least favorite book. It was such a relief to get back to Vlad after struggling with To Reign In Hell that I didn't pay enough attention to what I was doing--I just wrote a straight-ahead story with nothing much else to it. That's fine, in my opinion, if it's a Really Good Story. But Yendi is only an okay story. I'd love to be able write this one over.

Not very positive, and while I can appreciate the author’s perspective that he did not accomplish what he wanted to with the novel and his prerogative for feeling so, what Brust is overlooking here is that for the reader, Yendi is still a damn entertaining novel. If this is the Vlad Taltos novel which Brust feels is his weakest, the rest of them should be damn fine indeed. Yendi may be a straightforward novel which didn’t achieve Brust’s aims, but the fact is, Yendi was a pleasure to read. Readers will enjoy this second trip into the world of the Dragaera and the wise-cracking (yet serious) assassin Vlad Taltos. Vlad is smart (unsurprisingly, so is the author) and this comes across on the page. Violence is the trade of Vlad Taltos, and he will resort to it when needed, but first he wants and needs to figure out what is going on. It is that game of trying to stay one step ahead (or to catch up) that is the true pleasure for the reader of the Vlad Taltos novels, and in that, Brust was quite successful.

I agree with Brust, insofar as Yendi represented a drop in quality after Jhereg.

Sure, maybe, but it was still a blast to read.

Yendi is a context. Who is Cawti? Why are friends Aliera and Vlad? I think is a good novel. Not a perfect novel like Jhereg, probably, but a good novel anyway.

Albos hit it. It's definitely not one of Steve's stronger works by itself (which is probably what he's reacting to, since he intended each book to be able to stand on its own). If read in isolation, it's "fluffier" than most of the other work (or as fluffy as an assassin with a reptile familiar can be). However, it provides valuable framework for the rest of the series while still entertaining the reader.