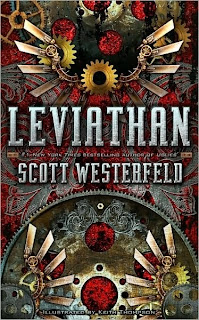 In his afterword, Scott Westerfeld writes

So Leviathan is as much about possible futures as alternate pasts. It looks ahead to when machines will look like living creatures, and living creatures can be fabricated like machines. And yet the setting also recalls and earlier time in which the world was divided into aristocrats and commoners, and women in most countries couldn’t join the armed forces – or even vote.

That’s the nature of steampunk, blending future and past.

From a background perspective, that’s about all the reader needs to know. Leviathan is set in the early days of an alternate World War I. The core events appear to be rolling out in a mostly historical fashion, except that the technology of the day is significantly different. England has followed the path of the “Darwinists” and have used genetic engineering (of sorts) to create great airships and military materiel which are biologically based. Austria and Germany have gone down a more industrial path and are referred to as “Clankers”.

This is all background, though it does form the underpinning of the philosophical differences between the various alliances and factions. It’s a part of the skillful worldbuilding of Scott Westerfeld, but it isn’t the story being told in Leviathan.

Leviathan follows two storylines which will eventually converge. The first is that of young Alek, the son of the Archduke Ferdinand. While his father is murdered in Sarajevo, men loyal to the Archduke spirit Alek away in the middle of the night in an attempt to escape away to a hideaway in Switzerland. Alek’s storyline brings Alek greater acceptance of who he is and what his life means in the greater scheme of the war and why he is a target. Through his escape Alek grows in maturity, though he still acts his age from time to time.

The second storyline is Deryn, a teenage girl in England who disguises herself as a boy so that she can enter the Service. Girls aren’t permitted to fly and all Deryn wishes to do is fly, in any capacity. Deryn is one of the top in her class, but her greatest challenge is to act like a boy at all times. She takes the name of Dylan, and her older brother helps get her into the Service. Quickly she, and the great whale-ship Leviathan, is thrust into war as England enters what readers know as World War I.

Leviathan is, at its core, a great adventure story. The danger of air travel and the inevitable battle is thrilling. Alek’s escape in the two legged “walker” (which puts me in mind of a somewhat more agile version of the AT-AT from The Empire Strikes Back) is likewise grand adventure laced with danger, action, and tension. Both characters are plunged directly into a world and a war they really know nothing about. Both are inexperienced and trying to find their way the best they can and are dragged around through forces they cannot control.

What makes Leviathan work, besides the admittedly excellent worldbuilding, the sense of adventure, and the sense of wonder, is that the characters of Deryn and Alek come across as equally sympathetic and real. Readers will want them to succeed, without knowing exactly what that means for either. The characters struggle in different ways and have different personal worldviews which will invariably clash with reality. The characterization here is top notch. Also notable is Westerfeld’s use of language. He gives each of the two sides (as shown through Deryn and Alek) particular ways of speaking. Alek uses exclamations like “God’s Wounds”, whereas Deryn uses “blisters” and “clart” as her society’s version of profanity. Those who disapprove of the genetic engineering are referred to as “Monkey Luddites”. It’s a perfect way to quickly distinguish culture and provides a bit of natural feeling pop to the dialogue.

In the end, what Scott Westerfeld has done is deliver one of the year’s best novels.