The Quiet War, by Paul McAuley 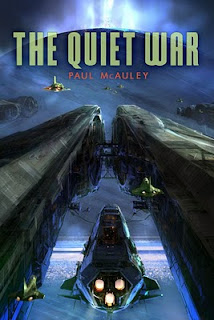 The enemy does not yet realize it, but we are already engaged in a small, quiet war of attrition and diplomacy, of propaganda and subtle sabotage. Their morale has been sapped. -pg 315

Paul McAuley’s definition of the “quiet war” late in the novel is really the comprehensive statement of what sort of novel The Quiet War is. The Quiet War is not a loud or flashy military science fiction novel. Though interstellar warfare is hinted at, especially in that first chapter with the pilots, The Quiet War has little to do with open warfare. There is military action, sure, but the novel is about the little political games that are played between two factions when all out war is not desirable.

As is likely in novels featuring colonization throughout the solar system (or beyond), Earth eventually comes into conflict with those colonies. With the extreme distance between Earth and the moons of Saturn, Earth-rule is a near impossibility, and space is the new West. The colonists left Earth because they were dissatisfied with life there and the longer humanity is away from the home-planet, the more the aims of the colonies differ from those of Earth.

The copy on the back cover purports that the central question of the novel is “who decides what it means to be human?”, but that doesn’t seem quite right. If The Quiet War has a central question, and it is perfectly acceptable if it does not, it may instead be “who decides the destiny of humanity?”, which is a somewhat different question. The governments of Earth desire that control, that the future, be on their terms. The “Outers” desire the freedom to chart their own individual destinies. Naturally, and naturally this is the central conflict of the novel told through the characters like Macy Minnot and Sri Hong-Owen and their roles in the conflict.

The Quiet War is smart science fiction and it is written in such a way that doesn’t require a PHD (or years of particular reading experience) for admission. The prose is clear and concise, conveying a good deal of information without bogging down the reader in technical jargon. The story stands without the jargon and is quiet beautiful in, well, it’s quietness. McAuley tells a story spanning multiple planets and moons, a potential war across the solar system, a reshaped and reformed Earth, introduces a variety of characters of intense scientific background, and he does it in a manner which fools the reader into believing this was all so easy to construct. Environmentalism, genetics, and galactic colonization and it is butter smooth.

This is an impressive novel. More science fiction needs to be like this.

Also, be sure to check out Adam Roberts' 2008 review of the novel.
Posted by Joe on Tuesday, December 15, 2009
Email ThisBlogThis!Share to TwitterShare to FacebookShare to Pinterest
Labels: Paul McAuley