Steal Across the Sky, by Nancy Kress 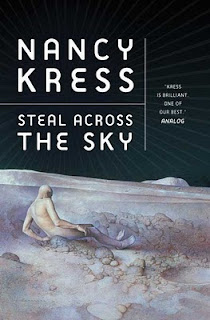 
This twenty-first novel from Nancy Kress opens with a fascinating premise: aliens identifying themselves only as the “Atoners” contact Earth via the internet. They state that 10,000 years prior they did a grievous wrong to humanity and request twenty-one volunteers to travel to another world and “Witness” something that will make clear what the Atoners did to humans all those years ago. The first half of the novel focuses on two of the twenty-one Witnesses: Cam and Lucca. Through Cam and Lucca the reader experiences two alien worlds that appear to be populated with humans. The Atoners’ crime is revealed by the end of the first half of Steal Across the Sky; the remainder of the novel centers on the human response to this information and what it means.

Typically for a Nancy Kress novel, Steal Across the Sky’s story is character-driven with the author giving only a limited third person viewpoint from a small number of Witnesses. Except for excerpts from news reports and presidential speeches, the global impact is not seen. One of Kress’s strengths as a writer is her ability to write compelling characters and to tell big stories through those character perspectives, but in this novel the characters—although well-written—may not deliver well enough for most readers and the Big Idea is left largely unexplored. Readers with an interest in the epic social ramifications of what the Witnesses learned will likely be disappointed.

There are also hints the story is much larger than the one being told, but whether the reader can decipher the big picture from the limited amount of pixels presented is debatable. The last quarter of the novel lacks satisfactory resolution because there’s simply not enough of the fictional photograph provided. Steal Across the Sky, despite its flaws, is a decent read but, unfortunately, it never completely lives up to its promising premise.

ow is it you keep picking books I *so* want to read?

I've got fantastic taste. Enviable, even.

Such modesty becomes you Joe :P

I read this book earlier this year and I feel more or less the same about it. What I do like about Kress' writing in general is that the aliens never do what you expect them to do. In the short stories I've read by Kress first contact tends to be anti-climatic. Something I find rather refreshing.

I must admit I haven't read that much of her work so I could be way off the mark here ;)