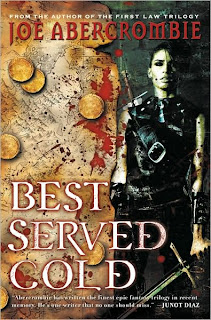 
As can be guessed from the title, Best Served Cold is a novel of revenge. Monza Murcatto is betrayed by her employer, Duke Orso. Her brother murdered and Monza assumed dead and dumped down the side of a cliff, Monza was left with nothing but hate. Once a renowned and feared general Monza was alone in the world. All that was left was a burning desire to take her revenge on Orso and the six other men responsible for her betrayal.

With the damage done to her body from her almost-murder, Monza hires a strange assortment of very dangerous people to assist her in her vengeance.

Best Served Cold is set in the world of Abercrombie’s debut trilogy The First Law and it is set a few years after the conclusion to Last Argument of Kings, but Best Served Cold stands on its own and requires to knowledge of the events of the previous three books. Several minor characters from the first trilogy make appearances here, and references to others also crop up, so those readers who are familiar with The First Law will have a greater reference point to who “The Cripple” is and why he should be feared, and Shivers past experience with The Bloody Nine will be sharp in the minds of those readers. The thing is, Best Served Cold works just fine without that background. Despite the twists and turns and betrayals, Best Served Cold is a straightforward story of revenge. There are all sorts of side stories going on, but the core of the novel is Monza and her desire to revenge herself and her brother’s murder on Duke Orso and carve a path of death through the seven she believes to be ultimately responsible. Damn the consequences.

Readers familiar with The First Law have an idea what to expect from Best Served Cold. For the potential reader who has never heard of Joe Abercrombie before, Best Served Cold is violent and profane, the novel is fast paced with plenty of action and betrayal. There is a sense of grit to the novel, that the blood may hit readers in their face. Best Served Cold is dark and nasty and it is an absolute delight.


Previous Reviews
The Blade Itself
Before They Are Hanged
Last Argument of Kings
Posted by Joe on Thursday, December 03, 2009
Email ThisBlogThis!Share to TwitterShare to FacebookShare to Pinterest
Labels: Joe Abercrombie

The opening chapters seemed to hold promise, but the story quickly degraded into nothing more than a string of violent and crude encounters. By the middle of the book, the story was just dragging as nothing new or interesting seemed to happen for chapters at a time.