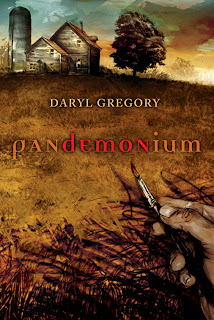 The world is just like our own, but with one notable difference. Possession is real. People can and do get possessed by demons, though usually for short bursts of time. There are particular demon identities which have been worked out: The Hellion, The Painter, Little Angel, Smokestack Johnny, and others.

Del Pierce was possessed when he was a child by The Hellion, a demon which causes the victim to act out as an angry child – except with much greater violence and a propensity towards shooting authority figures in the eyes with a slingshot. Ever since that possession, Del hasn’t been quite right. He’s been suffering the effects of that possession to a much greater level than most. He needs to tie himself down when he goes to bed or he’ll thrash and become violent at night. He’s had the occasional “episode” since that childhood possession. In short, something is wrong. Del believes the demon never left, which would be a rare thing indeed. Pandemonium is the story of Del trying to exorcise the demon within. This isn’t the Linda Blair style of possession and exorcism and the clichéd methods are unlikely to work, but Del needs to be free of the Hellion.

By grounding the story of Pandemonium in our world and only twisting just one little (important) thing, Daryl Gregory has made the impossible seem real. Though it isn’t understood and the origins aren’t known, possession in Pandemonium is accepted. There is even a fan culture built around possession. Del Pierce is a sympathetic lead character and his relationships with his brother and mother are exceptionally well written. There is a history there that is far beyond the characters being Mom and Brother. The character writing here is to be admired, and those relationships build far more tension than all of the demon possession combined. That’s because everything impacts a real person. It’s about how Del’s mother is impacted, the physical consequences to Del’s brother.

Gregory is heavily referential to science fiction authors A. E. Van Vogt and Philip K. Dick, so much so that Dick himself is a character in the novel (possessed by the archetype of one of his own characters). Not having read either Van Vogt or Dick, the one thing I cannot determine is whether knowledge of the works of those two authors would enhance the reading of Pandemonium. What I can state for sure is that not having a working knowledge of either author is no hindrance to engaging fully with Pandemonium. Gregory does an excellent job telling this story for all readers, not just initiates of Van Vogt and Dick.

Now, this whole fan-culture and self-referential science fiction detail may be a turn off for some (or many), and it is one of the weaker aspects of the novel. The weakest, though, is an otherwise out of place side story with The Human League. Not the band. Something to do with superheroes or secret agents, or something. It’s absurd and sticks out like a sore thumb.

The rest of the novel? It’s damn good. It’s a very strong debut. Based solely on Pandemonium, Daryl Gregory is an exciting new author and one to watch. His second novel, The Devil’s Alphabet will be published this year. I’ll be looking for it.


PS: I’ve done better reviews. I know. For as much as I enjoyed the novel, writing this was a struggle.
Posted by Joe on Monday, September 28, 2009
Email ThisBlogThis!Share to TwitterShare to FacebookShare to Pinterest
Labels: Daryl Gregory, World Fantasy Awards

Out of all the nominated novels, I enjoyed this one the most.

Good review. I've debated about this book, but I think I'll get it now. Thank you!

The book is very much worth it. I struggled a bit in conveying that, but yeah - very good book.