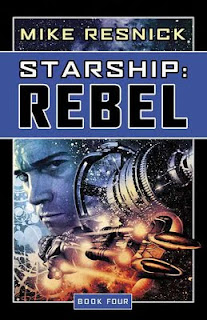 After a personal tragedy and a monumental act of evil from the Republic, Wilson Cole turns his small fleet from mercenary work-for-hire to directly target and take on the Republic Navy itself. His fight, as Cole makes clear early on, is not with the Men of the Republic, but with the Navy which has systematically perpetrated acts of genocide from which Cole can no longer look the other way. Cole’s initial goal is to simply remove the Republic’s warships from the Inner Frontier, to make the Frontier a place where the Republic dares not to send ships. Presumably, the Republic’s war with the Teroni will prevent them from sending a massive fleet against Cole and the Theodore Roosevelt. That’s Cole’s hope.

Starship: Rebel is the fourth volume in Mike Resnick’s series about the adventures of Commander Wilson Cole and the ship the Theodore Roosevelt. Cole was a former senior officer in the Republic Navy with a bad habit of allowing his personal morality to cause him to disobey direct orders. His actions generally resulted in great victories for the Republic and prevented other acts of genocide, but Cole did disobey orders. That led to Cole’s mutiny, his subsequent arrest, his crew’s further mutiny in rescuing him, and Cole taking the Theodore Roosevelt away from the Republic.

That is Cole’s backstory, and the premise of Starship: Rebel. Anyone who has read the first three Starship novels has an excellent idea what to expect from Starship: Rebel.

The Starship series, in general, is military science fiction that is written in a very easy and accessible manner. Without any disparagement intended, Starship is the sort of novel one might recommend to a new genre reader looking to get into the space adventure type of science fiction but isn’t ready for the heavy technological explanations of, say, Peter Hamilton. Like John Scalzi’s Old Man’s War, Mike Resnick’s Starship series is introductory-level science fiction, and this is meant as a compliment. It’s the stuff that can hook new readers while pleasing long-time readers of the genre.

Starship: Rebel is not notably different than the first three volumes of the series. This is not the place to jump into the series, though Resnick’s storytelling is such that readers will likely be comfortable with this volume as an introduction – but the character connections won’t be nearly as strong as if they start with Starship: Mutiny. All of the standard traits of the series are here: the frequent use of humor, Val’s indestructibility, Cole’s morality, the occasional space battle. There are great similarities here and not much (if any) character growth from one novel to the next.

But that’s not why we read Mike Resnick’s Starship series. We read the books because they are fun to read. If you’re looking for some smart light and easy reading, a sense of adventure and some action, a lead character with a quick wit and who is unequivocally a “good guy”, these are your books. Starship: Rebel satisfies that itch.


Also, it is worth nothing that this series is part of Resnick’s larger Birthright universe and is set very near the end of the Republic era. This tidbit doesn’t spoil anything because the chronology in the appendix is in each of the previous volumes, but knowing where this series seems to be headed, it is likely that Cole’s actions will play into a change of a political era in Man’s history. It’s worth tracking down Resnick’s early collection Birthright – it tracks humanity across the ages with a series of short stories (or vignettes, really) and sets the framework in which Starship is set. It’s not necessary to enjoy the novel, but serves as a counterpoint for the universe.

A Question Of ITIL said...

Great writer!
His book Adventures: The Chronicles of Lucifer Jones Vol I. 1922-26 is available for free