The Path of Daggers, by Robert Jordan 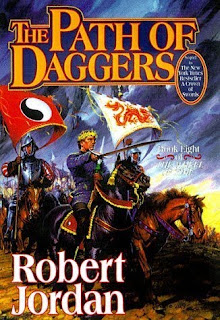 The Path of Daggers
Robert Jordan
1998

I'll just be upfront here, The Path of Daggers is a little tedious. The novel fares a bit better now than it did back when it was first published because there is no longer a wait for the next volume. It's not that nothing happens in The Path of Daggers, but Jordan uses more pages to cover a smaller amount of time than he had in previous volumes.

One of the more important things to happen in The Path of the Daggers is something that is only introduced, and not necessarily ever explained as to what it means. The legendary Aes Sedai Cadsuane meets with the Aiel Sorilea and together they decide to work together to try to make Rand less "hard" and more "strong.

Cadsuane drew breath. A chance she would have scoured anyone else for taking. But she was not anyone else, and sometimes chances had to be taken. "The boy confuses them," she said. "He needs to be strong, and makes himself harder. Too hard, already, and he will not stop until he is stopped. He has forgotten how to laugh except in bitterness; there are no tears left in him. Unless he finds laughter and tears again, the world faces disaster. He must learn that even the Dragon Reborn is flesh. If he goes to Tarmon Gai'don as he is, even his victory may be as dark as his defeat."

The whole thing with Rand being "hard" is a major aspect to the last handful of novels. Rand thinks he needs to be "harder" to prepare himself for Tarmon Gai'don, that being human and caring would lead to his downfall. On one hand Rand does have his eye on the ball. He knows that everything he does must be in preparation for that final conflict, the one which only he can fight (he believes). The "hard" thing, though, is making him cold and callous to others - others who are not Min, Elayne, or Aviendha. His behavior towards Perrin in A Crown of Swords is an example of this.

There are other things going on. We see Moridin watching Aviendha / Elayne / Nynaeve in Ebou Dar and when Aviendha unravels a weave, Moridin realizes she just did something they did not know of in the Age of Legends. And there's a gholam watching Moridin. Which is interesting, if unexplained.

The A / E / N trio eventually travel from Ebou Dar to Caemlyn, but on the way the Bowl of Winds is used to fix the weather. It's a major development that is seven volumes coming, but as important as it is, it is almost glossed over because the women still have things to do. It's weird how something that big and important is almost overlooked right after it is done.

As interesting as anything else is the introduction of Cyndane, a character who appears with Moghedien and is rather commanding with Graendal. There is no explanation as to who Cyndane is at this time, but by the next novel we realize fairly quickly that Cyndane is the reincarnation of Lanfear. We also learn that Cyndane is sort of in charge of Moghedien, though both are terrified of Moridin. And that Moridin was named Nae'blis, which makes him the most important person in service to the Dark One. Besides the weirdness that is Shaidar Haran.

A great line later in the novel:

I only point that out because it's such a sweet throwaway line.

By the end of the novel, here's where we are left:

Egwene takes full control of the rebel Aes Sedai in Salidar and begins the siege of Tar Valon.

Faile, Maighdin (Morgase in disguise), and Alliandre are captured by the Shaido Aiel (along with Bain and Chiad)

Rand is attacked in Cairhain by renegade Asha'man. Fedwin Morr (a likeable young man) has his brain addled to that of a small child. Rand gently kills him with poisoned wine.

Perrin intends to bring The Prophet (Masema) to Rand so he can answer for the slaughter done in Rand's name.

This is more of a novel recap than a proper review, but at this point there is not much to say in review. With 600+ pages, there are long gaps of unexplained plans and minor plots with brief flashes of development and action. If I had to wait two years for Winter's Heart, I would probably be really disappointed. As it is, The Path of Daggers is what it is: a long novel that only sets up a couple things for the future but overall doesn't move the timeline along very much.


Previous Reviews
The Eye of the World
The Great Hunt
The Dragon Reborn
The Shadow Rising
The Fires of Heaven
Lord of Chaos
A Crown of Swords
Posted by Joe on Thursday, September 03, 2009
Email ThisBlogThis!Share to TwitterShare to FacebookShare to Pinterest
Labels: Robert Jordan, The Wheel of Time

Robert Jordan pretty much slows down the action from books six to nine.

I always thought the fixing of the weather should have been the ending of book seven instead of the beginning of book eight.

Yeah. It's such a big deal, but it is almost turned into an afterthought. Not like the cleansing, which took up the finale of Book Nine and was so important that Jordan gave us another book of people noticing it.