We Never Talk About My Brother, by Peter S. Beagle 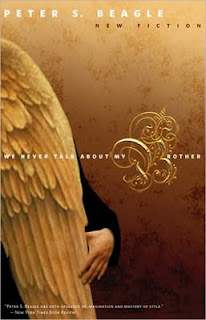 We Never Talk About My Brother
Peter S. Beagle
Tachyon: 2008

Peter S. Beagle’s latest short story collection, We Never Talk About My Brother, contains two original stories and seven reprints from 2007 and 2008. It features the three stories in his World Fantasy Award nominated chapbook Strange Roads, including “Uncle Chaim and Aunt Rifke and the Angel”, which is nominated for a World Fantasy Award in its own right (Best Novella). “The Last and Only, or, Mr. Moscowitz Becomes French” was reprinted in Jonathan Strahan’s anthology The Best Science Fiction and Fantasy of the Year, Volume 2. This is to say that some of the stories in We Never Talk About My Brother are very fine indeed.

Let’s start with the five stories which are not mentioned in the above paragraph (granting that Strange Roads covers three of them). Two of those five are quite excellent. The title story features characters named Jacob and Esau, and is narrated by Jacob. He’s aware of the Old Testament nature of their names. Just so you know. In an otherwise normal setting, Esau has the power to change things with just a word. Like when Esau was a child and told another boy that “You got run over”, and somehow, days later, that boy did get run over by a car…except that it happened a week prior. That’s the sort of change Esau is capable of. “We Never Talk About My Brother” deals with the inevitable conflict of brothers named Jacob and Esau, and this is a well told story of imagination. As with the other stories in this collection, Beagle knows how to end the story.

“The Stickball Witch” is another standout story. Remember back to your old neighborhood and that one house on the block, the one with the crazy lady. You may have called her a witch, or not, but you didn’t go into her yard. This is the story about what happens when you DO go into her yard to get your ball. Part of the story you can probably predict, but the rest of it is entirely unexpected. “The Stickball Witch” feels like a story of home, of childhood, of baseball, and Beagle successfully evokes all of that and more in this beautiful story.

Less successful is the closing story, “Chandail”, which is set in the world of his novel The Innkeeper’s Song. Maybe enjoyment of the story depends on knowledge of the novel, because I’m not sure it works nearly as well on its own. “Chandail” features a character named as Lal, sometimes known as Sailor Lal, Swordcane Lal, and other names. The story focuses on Lal’s hate of her sister, and hate of the creatures known as chandail, and her attempts to heal both. Neither hate nor healing resonated at all with me and “Chandail” left me cold the whole way through. This was perhaps not the best story to end the collection with. It’s not a high note, rather it’s the lowest. I expect rampant disagreement on this opinion.

Far better are the four stories I was most familiar with. I wrote about Strange Roads already, and it is worth repeating what I said about “Uncle Chaim and Aunt Rifke and the Angel”, which is:

There is nothing flash here, but we are left with something quite wonderful in the end. A story of grace and power and beauty, a story that ends just when it needed to and leaves the reader satisfied.

It’s an excellent story. While neither “Spook” nor “King Pelles the Sure” reach the heights of “Uncle Chaim”, both are standout stories. As is “The Last and Only, or, Mr. Moscowitz Becomes French”; a story with a very literal title. This is a charming story of an initial obsession of all things French, and a man who eventually requires English lessons because he begins to forget his own language. It’s a sweet story, if a bit sad.

While there are a couple of weaker stories, We Never Talk About My Brother is a very strong collection of short fiction. Fully two thirds of the stories are well worth reading and could reasonably be considered some of the best of the last two years. They should be, because they are. This is a collection which deserves to be read, which should be read by all fans of good stories.