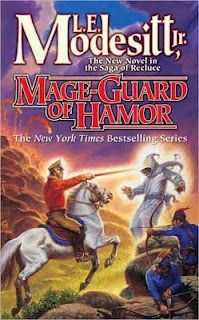 “Same as it ever was”. I should give thanks to David Byrne and The Talking Heads for providing such a simple refrain that can be so easily used to describe L. E. Modesitt Jr’s Recluce series. Anyone who has read two or three Recluce novels will have an excellent idea what to expect, and if you’ve only read the first volume (The Magic of Recluce), well, you also have an excellent idea as to what to expect from the series. The names of characters may change, and the locations may sometimes be different, but there is a great deal of similarity in the storytelling and even in what happens to the protagonist.

Mage-Guard of Hamor is the fifteenth volume in this long running series of connected novels and is the direct sequel to 2007’s Natural Ordermage (review here). Rahl was the latest in a long line of heroes who came from the island of Recluce, a small island predicated on the magical use of Order – which frequently puts them in conflict with much of the rest of the world. Rahl was exiled from Recluce because he was not able to learn control over his Order-based powers and because he was too sure of his own personal rightness and pretty much because the Magisters in control of Recluce didn’t know what to do with him. Rahl is exiled to Hamor, the largest nation in the world (and one frequently in conflict with Recluce). Rahl was to learn control over his order skills and then return, but as frequently happens in this series, Rahl got himself in trouble by doing the right thing. To summarize the entire rest of Natural Ordermage in a hurry, Rahl ended up serving Hamor as a member of the Mage-Guards and apprenticing under Taryl, a senior leader of Hamor.

This brings us to Mage-Guard of Hamor. Much of the novel is Rahl patrolling in Hamor in the effort to put down a rebellion which could cost the current emperor the throne. Through the patrols Modesitt reveals details of the daily life of Hamor, which isn’t terribly different than daily life in Recluce or Candar – which just goes to show that people are people are people everywhere. The difference is with those in leadership roles and Modesitt also reveals the political landscape of Hamor, the trappings of power and the struggle between men of integrity and those without. This is also the same as in other lands. The details are just different. The core is the same.

What makes Mage-Guard of Hamor so similar to every other novel in the Recluce series (and also similar in parts to The Corean Chronicles) is that Rahl is a young man who feels that everyone owes him an explanation of how things work and what is truth. The result is that Rahl struggles through lessons and understanding, and he tries to do the right thing but also finds that he does too much with unexpected consequences. He gets frustrated a lot, but that leads to greater growth by the end. That sounds like Lerris, Creslin, Justen, and most of the other heroes of this series. This shouldn’t be a shock to anyone reading this series.

New readers to the series can start almost everywhere, but probably not with this book since it is the second part of a duology. Natural Ordermage would be a better place to start if one wanted this particular story. Otherwise, I’d recommend either The Magic of Recluce or The Towers of the Sunset. The Towers of the Sunset was my entry point and sold me on the series.

In terms of whether or not Mage-Guard of Hamor is “good” or not, it’s tough to say. I’ve been reading this series for a long time and it reads like comfort food. There are far better fantasies on the market and the series has (for me) lost any sense of discovery or “sense of wonder”. I know exactly what I’m going to get from L. E. Modesitt Jr. and Recluce and I don’t expect anything more than that. Mage-Guard of Hamor offers no surprises, a great deal of repetition, and will probably only satisfy longtime readers of the series who want more of the same. I honestly don’t know what a new reader would think of Natural Ordermage and Mage-Guard of Hamor. There are a handful of novels in this series that I would recommend as worth exploring over this one, but I also can’t point to any that was a true disappointment. They offer variations on a well worn theme. It’s difficult to make value judgments on comfort food. It’s good *enough*.

But like I’ve said before, the Recluce novels are all so similar that I recommend not reading them back to back (to back). Take your time and you’ll be much happier.
Posted by Joe on Wednesday, September 23, 2009
Email ThisBlogThis!Share to TwitterShare to FacebookShare to Pinterest
Labels: L. E. Modesitt

As Recluce books go this one isn't bad but you certainly have a point about it being comfort food. I mostly still read them because I like to piece the history of that world together.

I understand there will be a 16th book next year with a female main character. A first for the series. Maybe that will break the feeling these books are the same basic story over and over.

Arms Commander. I believe it is set in the time of the Angels (Ryba, Saryn, Nylan, etc) and has something to do with Westwind. I might be wrong about Westwind, but it's definitely Saryn and Saryn ties into Westwind and Sarronyn.

We'll see about the same base story. Kharl was a bit of a change because he was a fully grown man, but we'll see if there is a true change with Saryn.